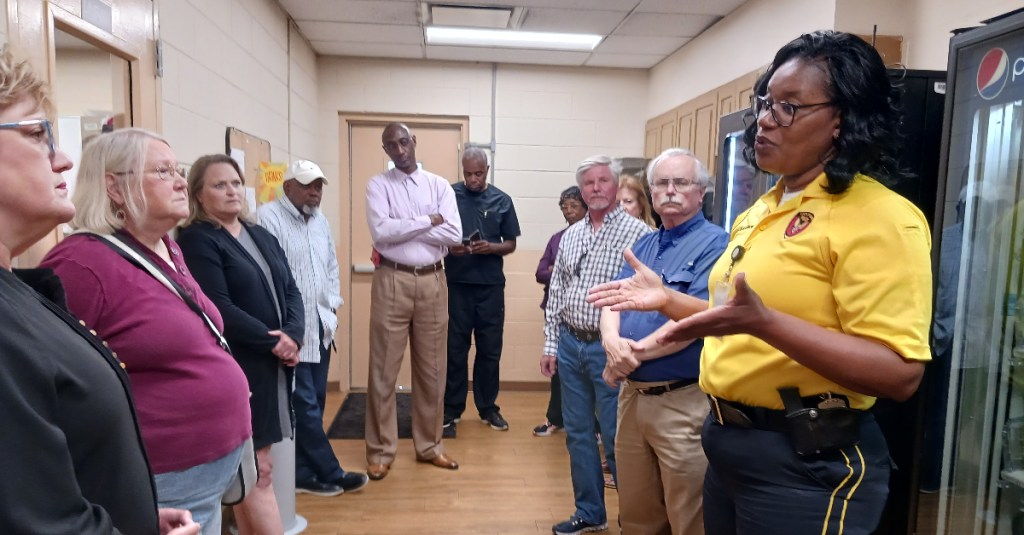 Vicksburg Police Chief Penny Jones talks with residents in the first Citizen on Patrol class in the lineup area where officers report for their shifts and parol assignments. The group toured the police department during its first class. (Photo by John Surratt | The Vicksburg Post)

On Tuesday night, 12 Vicksburg residents stepped into a new environment.

The Vicksburg Police Department’s Citizens on Patrol Academy is designed to give local residents a look inside law enforcement and help them better understand how the department operates.

According to the program’s course manual, the academy’s goal is to educate residents about the department’s structure and activities and provide a series of classes to give the residents a behind-the-scenes look at the department.

“The program operates on the premise that informed and educated citizens will be more supportive of the officers and the department, which in turn makes them more productive within their own communities,” according to the program’s mission statement.

And the inaugural group of residents will have a part in helping shape the program’s future, Vicksburg Police Chief Penny Jones, who organized it, said.

A 23-year veteran of the police department, Jones was named chief in 2021 by Mayor George Flaggs Jr. She said the academy was a program she has considered for some time.

“The times have changed, people have changed; everything has changed,” Jones said as she talked to the group Tuesday. “People have a different perspective on how they look at police officers. Not just police; just first responders in general because we have been exposed to so many things.

“I definitely want you all to get a feel of walking in our shoes; some of the things we do on a daily basis,” Jones added. “I felt like it would be good if you got a brief synopsis of what investigations does, what narcotics does; different areas, different things that we conduct and do every day at the police department. You will get a feel for what we do every day.”

During the 10-week academy, the residents will learn about the different divisions in the department and do a ride-along, where they will ride with a uniformed officer on a patrol shift. They will also hear from Warren County Sheriff Martin Pace and take a virtual tour of the Warren County Jail, and from Bobby Rufus with Vicksburg-Warren 911, who will discuss E911 operations.

The final class will look at a crime scene investigation where the residents will be able to work a mock crime scene.

Jones, her deputy chiefs, supervisors and other officers will serve as instructors during the academy, allowing the participants to meet and talk with the officers in a relaxed setting.

“I think it will be good to see us in a different light,” she said.

“You are our pilot group,” Jones told the residents. “We chose you guys because you are some of the pillars in our community; you are some of the first people that we thought about so we want your opinion. We want you all to say, ‘I think you all should do something different’; we’re always working for improvement so we are definitely going to be getting your input while we’re going through the academy.

“Your input makes us better so I definitely am looking forward to working with you guys. This is our first project. We’re going from this group to the next,” she added. “What we get from you all is what we’re going to give to them (the officers). I think we will really be ready for the next academy because we’re going to have your input.”