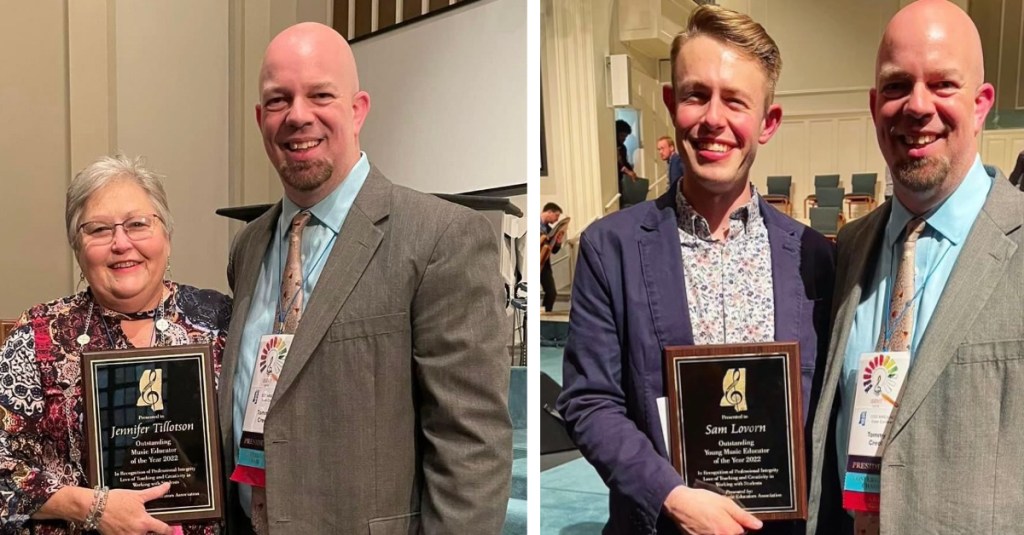 Each year, the Mississippi Music Educators Association honors two outstanding music educators, recipients are nominated by their fellow teachers who are members of MMEA.

This year, both recipients of these awards were from the Vicksburg Warren School District.

In disbelief when her name was called, Tillotson said, she felt grateful in the moment.

As a music teacher with the District for 26 years, Tillotson said, it had always been a “joy” to teach and to especially “watch the kids” grow in their musical ability from elementary school to high school to college.

“Some of them are actually music teachers now. That is the ultimate award,” Tillotson said.

Nancy Robertson, who is the Fine Arts Coordinator of the VWSD, hailed Tillotson on her accomplishments.

“All of her life Jennifer Tillotson has used her gifts and talents in ways that are most certainly pleasing to the One who gave them to her. Our city, our state, our county and our world are a better place because she has been here,” Robertson said.

Winning an award was also a surprise for Lovorn — at least up to a point, he said.

“The way they did the award — to nominate someone, you had to have letters of recommendations from principals, from co-workers and from students. So, they took all of these letters and read the ones that had been sent,” Lovorn said.

But they didn’t reveal the name of the person about whom the letters were written.

But, it kind of “clicked,” he said, as more details were read from the letters.

“So, when they said it was me, I was overcome with emotion,” Lovorn said.

And like Tillotson, he said he was humbled to receive the award as well as to hear all the nice comments said about him as a teacher.

In college, Lovorn said he had become aware of the Educator of the Year award, and while he had not made it his “mission” to win the award, he did want to aspire to its ideals.

“I set the goal of being the very best teacher I could,” he said. “The award makes me want to continue being a better teacher and it makes me want to get more involved in the organizations in the state and not only help the school that I am at, but to also to be an advocate for music education across the state and really build Mississippi ‘s music education and arts programs and help aid other teachers in their journey.”

Robertson said there was no question in her mind, Lovorn will continue to excel in his teaching skills while also promoting music and the arts in whatever capacity he is called to do so.

“I have known Sam Lovorn for five years, but it only took me five minutes to see the drive, determination and passion he has for his art, his profession and his students,” she said. “In my 40-year teaching career, I have never met his equal.”

Ironically, before the pandemic, Lovorn said, he had made the decision to leave the teaching profession and had plans to leave Mississippi to go and work at Disney World.

“But, then COVID happened, and God said, ‘You’re not going to Disney World,’ and I stayed as a teacher,” he said.

Staying, Lovorn said, caused him to have to reevaluate his teaching philosophies since he thought he was done with teaching.

One of the philosophies he chose to implement, he said, he now shares daily with his students.

“I say every single day and all my kids can recite it by heart, blessed are the flexible for they shall not be bent out of shape,” Lovorn said.