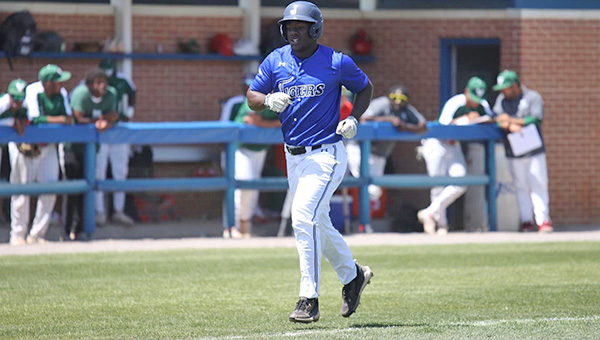 STARKVILLE — LSU and Mississippi State both came into the weekend trying to find their footing in the Southeastern Conference baseball standings.

One did, and the other fell into a pretty big hole.

Josh Pearson hit two home runs and had five RBIs, Dylan Crews drove in three more runs, and LSU stepped on the gas in the middle innings to beat Mississippi State 13-3 on Sunday.

LSU (23-9, 7-5 SEC) swept the three-game series to move into a three-way tie for second place in the SEC West. The Tigers are one game behind Arkansas, and tied with Auburn and Alabama.

The sweep was LSU’s first in the SEC since March 2019, when it swept Kentucky in Baton Rouge. It was the first SEC road sweep since May 2017 at Mississippi State.

“We played great complementary baseball today,” LSU coach Jay Johnson said. “Pitching spearheaded it, there was complimentary defense with a zero in the error column, and offensively it was one of our best days of the year.”

Mississippi State (18-15, 4-8) has lost six of its last seven SEC games and is tied with Ole Miss for last place in the West.
LSU scored four runs in the ninth inning to steal Friday’s series opener, and had another big inning — or several of them, actually — to turn the finale into a rout.

LSU scored 12 of its 13 runs in a four-inning span from the fifth to the eighth. Pearson accounted for three of the Tigers’ five runs in the fifth inning with a three-run home run. In the seventh, he and Cade Doughty hit back-to-back home runs, and the Tigers added four more runs in the eighth inning.

Doughty finished 2-for-5 with a homer, double, two RBIs and two runs scored.

Pitcher Grant Taylor (4-0) had six strikeouts and allowed two runs in four innings out of the bullpen to earn the win for LSU.

R.J. Yeager and Slate Alford both homered for Mississippi State.

Denton also hit an RBI double in the first inning and finished with three RBIs. Dominic Tamez added two hits and two RBIs for the Crimson Tide, who earned their first sweep in Oxford since 1997. They’ve won eight of their last nine games.

Ole Miss has lost four games in a row, and was swept at home for the second time this season. No. 1 Tennessee took all three games from the Rebels March 25-27.

Tim Elko hit a two-run home run and Kemp Alderman a solo shot to account for the Rebels’ runs on Sunday.

McGillis’ home run capped a wild back-and-forth game. Charlotte’s Kaden Hopson hit a two-run home run in the seventh inning to tie it at 4, and the teams exchanged runs in the 12th to leave it at 5-5.

In the 13th, McGillis put Southern Miss ahead 6-5 with his one-out home run to left field. Garrett Ramsey then retired the side in order in the bottom of the inning to give the Golden Eagles their second series sweep in four C-USA weekends.

Ramsey (4-0) also worked his way out of a jam in the 12th inning by getting the last two outs, and earned the win.

JSU (16-16, 4-8 Southwestern Athletic Conference) got a two-run homer from Devontae Rhodes, a three-run homer from Caleb Evans, and a solo homer from Jefrey Rodriguez to sweep its first conference home series of the season.

After Valley scored five runs in the third to take a 5-4 lead, the Tigers regained the lead in the home half of the third and never looked back. With one out, Marcus Atterberry walked before Rhodes crushed a 2-2 pitch over the left field wall to give Jackson State the lead for good at 6-5.

An eight-run fourth broke the game wide open. The Tigers sent 14 batters to the plate and took advantage of five walks.
Evans finished with five RBIs, Rhodes had four, and Rodriguez had three.

Khalil Smith and Diego Lopez-Molina hat three hits apiece for Alcorn. Lopez-Molina doubled and tripled, drove in one run and scored another. Alcorn has allowed 10 runs or more in all 22 of its losses.

Trahan hit a solo home run to get the big third inning started, and then finished it with a two-run shot to give the Statesmen a 12-4 lead. He was 3-for-4 with three RBIs and three runs scored in the game.

Avery Brock drove in two runs for the Majors, while Chris Hart and Mason Little scored two each. Millsaps scored four runs in the seventh inning and two more in the eighth to surge ahead for good.