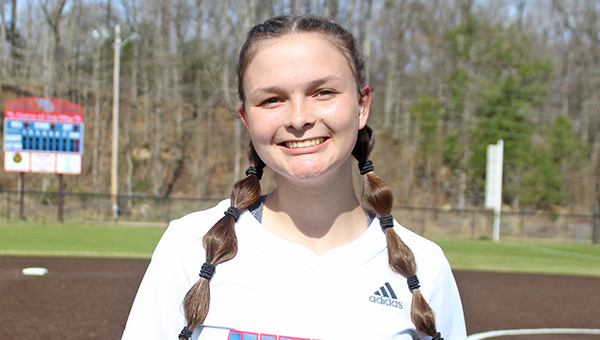 Warren Central softball player Jenn Smith had three hits, including a walk-off RBI single, in a 6-5 win over Pearl on Monday.

Jenn Smith hit an RBI single with two outs in the bottom of the seventh inning to score her sister Jill Smith as the Lady Vikes defeated Pearl 6-5.

Jenn Smith finished with three hits, drove in one run and scored another. Kayleigh Karel also had two hits and three RBIs for the Lady Vikes (15-8, 1-3 MHSAA Region 6-6A) and Mary Evelyn Hossley went 2-for-3 with one run scored.

Warren Central rallied twice in the later innings after letting an early lead slip away. Pearl’s Jalin Coleman hit a two-run home run in the fifth inning to put Pearl ahead 4-3, and then Warren Central answered with a two-run single by Karel in the bottom of the sixth to move back in front.

Pearl scored again in the top of the seventh, on a sacrifice fly by Matti Darby, to tie it at 5.

In the bottom of the seventh, Jill Smith hit a pinch-hit single to help the Lady Vikes load the bases with one out. A fielder’s choice moved Smith to third but took the total to two outs, before Jenn Smith singled to left field to bring her sister home and give the Lady Vikes a 6-5 win.

The win was Warren Central’s first in region play, and kept its hopes of earning the No. 2 seed from Region 6-6A alive. Warren Central was set to host another region opponent, Terry, in a varsity doubleheader Tuesday but it was was postponed because of the threat of severe weather.

Warren Central and Terry will instead play two games Thursday, at 5 and 7 p.m., at Sports Force Parks.