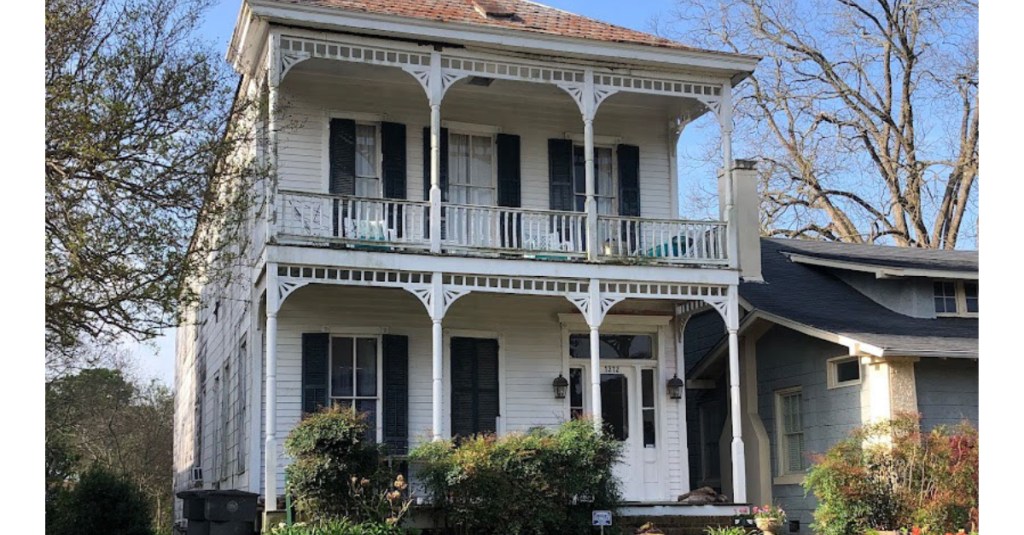 Like the house next door (to the east) the two-story three-bay galleried townhouse at 1312 Grove St. was built by Samuel Feld in 1886 for rental property.

William Stanton, the architect, designed this one, too, and it was built by Curphey and Mundy for $3,050. Upon completion, it was the home of Hannah and Alfred Leon Fischel, a bookkeeper with Baer and Brothers and later with Adolph Rose and Company, and Victor and Rosalie Brown, the parents of Hannah.

Victor was born in Essingen, Germany. and came to Vicksburg before the Civil War and started the dry good company of Brown and Brothers. In 1884, he, together with Adolph Rose, started the wholesale dry goods firm of A. Rose and Company.

Upon his death in 1911, the Herald reported that “Mr. and Mrs. Brown were a peculiarly devoted couple and were sweethearts from the days of their youth until death finally broke the sweet tie between them. The deceased gentleman was a quiet, unostentatious citizen, who sought no honors, but was content to earn the goodwill and respect of his fellow man and make a success of his business ventures. He was a member of the Knights of Honor, of the Free Sons of Israel and the I.O.B.B.”

Rosalie continued to live in the house after the death of her husband and then moved with her daughter to their new house on Cherry Street which Alfred Fischel built in 1912.

In January 1913, Fischel was elected to the Warren County Board of Supervisors. He died a few months into his term in 1913 of “acute indigestion.”

In 1914, the Grove Street house was the home of Alfred and Mamie Davis. He was a freight agent with the Y and MV Railroad. Many people lived in the house in the years after until it was purchased and rehabilitated by Bill Longfellow in the 1980s.