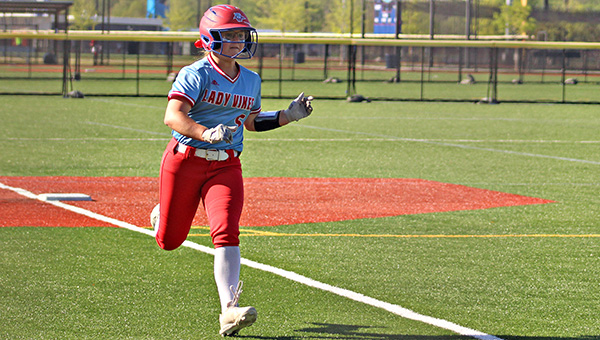 Warren Central's Sarah Cameron Fancher heads toward home plate to score a run against Terry. Fancher scored a total of five runs and drove in two as the Lady Vikes swept a doubleheader, 11-0 and 17-2. (Ernest Bowker/The Vicksburg Post)

Warren Central needed to score a lot of runs on Thursday, and it did.

The Lady Vikes batted in seven innings and scored in every one to sweep a softball doubleheader from Terry, 11-0 and 17-2, at Sports Force Parks.

The sweep — combined with Northwest Rankin’s 12-0 win over Pearl — propelled Warren Central into the No. 2 seed from Region 6-6A in the MHSAA Class 6A playoffs. WC edged out Pearl via a series of  of  tiebreakers and will face Harrison Central in the first round beginning April 22.

“I’m excited and ready to do it. Two years ago we got cut short and last year we didn’t make it for the first time in a long time. That was something that was really hard to swallow,” Warren Central coach Dana McGivney said of the postseason. “Coming back this year and playing better, we’re looking forward to it.”

The Lady Vikes (17-8, 3-3 Region 6-6A) won for the sixth time in seven games, with the last three of those coming against region opponents. They took a walk-off win from Pearl last Friday, and had no trouble wiping out Terry six days later.

In game one, Maddie Pant threw a five-inning no-hitter and five players scored at least two runs apiece in an 11-0 run-rule victory.

Kennedi McKay and Makayla Jackson both doubled and scored twice. Jackson drove in two runs, as did Tyra Bridges.

The Lady Vikes drew 14 walks in game two and scored 11 runs in the first inning as they rolled to a 17-2 victory in only three innings. They only had three hits — singles by Fancher, Jenn Smith and Kayleigh Karel.

Karel also had three RBIs and scored twice. Every Warren Central starter scored at least one run. Annalyn Nevels pitched two innings and Abby Morgan one, as they combined for six strikeouts.

“I’d still like to see us hit the ball better. I don’t feel like we hit it as well as we should have. But we’ll take it,” McGivney said.

Now the Lady Vikes can turn their attention toward the postseason. They’ll finish the regular season with home games Monday against Loyd Star and Tuesday against Madison Central, and can reach the 20-win mark for the first time since 2014 by winning both of those and one playoff game.

McGivney thinks this year’s squad is capable of a lot more than that.

“I feel like we’re playing pretty well. We’ve got three pitchers that can come in and throw at any given time, which is a big asset for us. And defensively, we’ve got several players we can bring in,” McGivney said. “That’s where we’re at, is looking at what works best. Every game it might be different. It’s just a matter of continuing to improve every game and hopefully peaking at the right time once the playoffs start.”

Finishing second in Region 6-6A could give Warren Central a slightly easier path through the playoffs. The Lady Vikes will get to dodge state powers Northwest Rankin and Brandon until at least the third round, and matches up with Region 7-6A champion Ocean Springs (13-6) if they can get past Harrison Central (7-8-1).

McGivney said she and her team, however, are just focused on taking the first step. The Lady Vikes won first-round playoff series in their last three postseason trips in 2017, 2018 and 2019.

“No matter what you do, down the line you’re going to have to go through Brandon and Northwest (Rankin) and things like that out of the South, so it doesn’t really matter,” McGivney said of finishing second in Region 6-6A instead of third. “It’s just a matter of getting through the first round.”