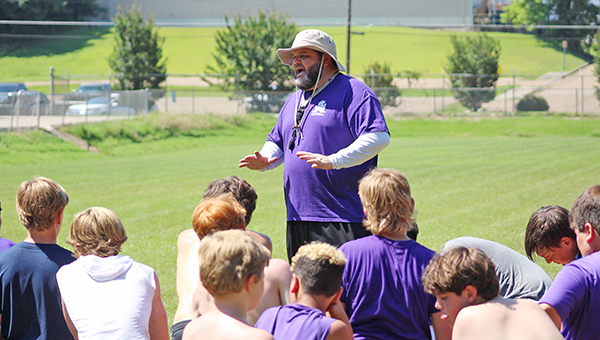 St. Aloysius football head coach Bubba Nettles talks to his team during a summer workout at Balzli Field in 2021. Nettles has been hired as St. Al's athletic director, in addition to his coaching duties, the school announced Thursday. (File/The Vicksburg Post)

St. Aloysius’ football head coach Bubba Nettles will spend the next few weeks learning all about his team as spring practice unfolds.

He’ll also start learning the ins and outs of a new job.

Vicksburg Catholic School announced Thursday that Nettles will be its new athletic director when the 2022-23 school year begins. Nettles will replace Mike Jones, who is retiring at the end of this school year.

Nettles will also continue in his current role as football head coach.

“I’m extremely excited about the future of St. Al athletics,” Nettles said. “I’m very appreciated for (principal) Karla McHan and Mike Jones for trusting me to pick up the torch where Mike is dropping it. Mike is an institution at St. Al, so I have mighty big shoes to fill.”

Jones, who also coaches St. Al’s golf team, has been with the school since 2002. He became the athletic director in 2014 and helped oversee St. Al’s move from the Mississippi High School Activities Association to the Mid-South Association of Indpendent Schools in 2015.

Jones said he will continue to work with VCS to assist with several ongoing projects related to a recent $1 million donation from the family of John Murray Pinkston, Jr.

“You get to a point in your career where it’s time to retire, and I’ve reached that point,” Jones said.
Nettles, meanwhile, is a relative newcomer to St. Al. He came to the school in 2020 as an assistant football coach and was promoted to head coach in April 2021.

Before coming to St. Al, Nettles coached football and powerlifting at Vicksburg High School for 10 years. He’s earned a reputation throughout his career as a coach who is passionate not just about his sport, but his players as well. He operates the clock at basketball games, ran the scoreboard for baseball, and was often seen at other sporting events like soccer and golf.

“Coach Nettles has fully invested himself in Vicksburg Catholic School both in and outside of the classroom,” McHan said in a statement announcing the hire. “He is a strong supporter of our student athletes and proudly cheers them on in all sports. While Mike Jones will be greatly missed, we look forward to what Coach Nettles will offer our program.”

Nettles also used the term “invested” when describing how he’s immersed himself into the St. Al community, and thanked McHan and Jones for putting their trust in him to take a bigger role in it.

“I have invested a lot of love, and a lot of blood, and a lot of tears into this community and to now see it paying off is a wonderful thing,” Nettles said. “I want to send a thank you to Carla and Mike for trusting in me and, quite frankly, my whole family. My wife (Katie) and two kids, we are Vicksburg Catholic School all the way with my wife teaching up there now. We are dedicated to that school. We are ready to take it as far as we can take it.”

As he slides into his new dual role, Nettles acknowledged he’ll have a lot of work to do — and a lot to learn. The athletic director’s role involves a number of administrative tasks both inside and outside the school.

“Mike’s done an excellent job. A lot of people don’t realize the true amount of work that Mike Jones puts in at that school keeping it up and running — the building and the campus, not just athletics,” Nettles said. “I can assure you that over the next few months he and I will have lots of talks and communication to figure out what key goes where and who does what. He is a very vital part of that campus.”

Football spring practice begins April 25, and the spring game is May 13 at Central Hinds, so Nettles will learn on the job as he performs his current job.

“It’s a lot of extra weight. It is something that I knew going into the interview process,” Nettles said. “One of the big things we talked about during the interview was juggling my duties as the athletic director and head coaching. I told (McHan) I don’t mind rolling my sleeves up and doing a little work, so it’s not going to bother me or scare me at all.”