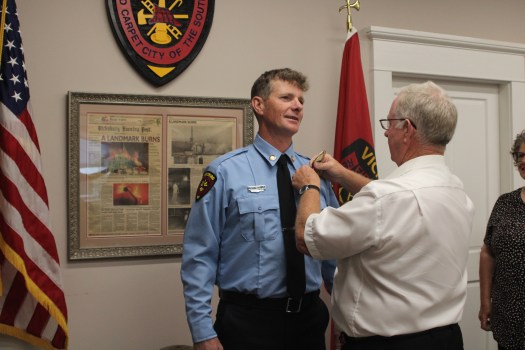 John Terry's father, Tommy, pins the lieutenant's badge on his son's uniform. John Terry is a third-generation firefighter in the fire department. His son Larsen is also a firefighter, making four generations in the department. (Photo by John Surratt | The Vicksburg Post) 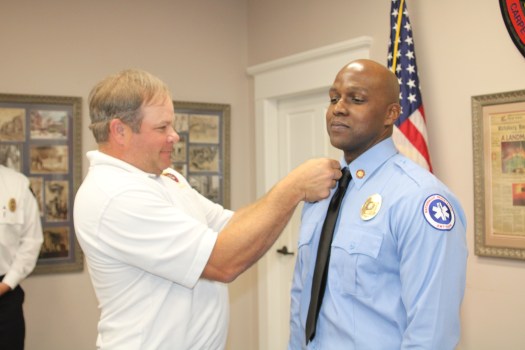 Two Vicksburg firefighters, one a third-generation firefighter in the Vicksburg Fire Department, were promoted to lieutenant in two recent ceremonies.

John Terry, whose father and grandfather served in the department, and Leo Sims, received their insignias of rank during the ceremonies at the Vicksburg Fire Department’s Central Fire Station.

“We’ve had quite a great year on the promotions list,” Fire Chief Craig Danczyk said. “We’ve had quite a few employees who put themselves in a really strong position. They studied for this test, made the list and then waited for the opportunity, and that’s happened to two of our lieutenants this week.

“I really appreciate the hard work you’ve done for the Vicksburg Fire Department and thank you for taking that test and putting yourself in that position,” Danczyk added. “You’re deserving and I think you’re ready for it.”

Danczyk said lieutenants in the fire department are the second officer on the trucks and drive the firetrucks on calls.

“Some of our trucks are in excess of $1 million and it’s a tremendous responsibility, and they get the crews to and from the emergency scene,” he said.