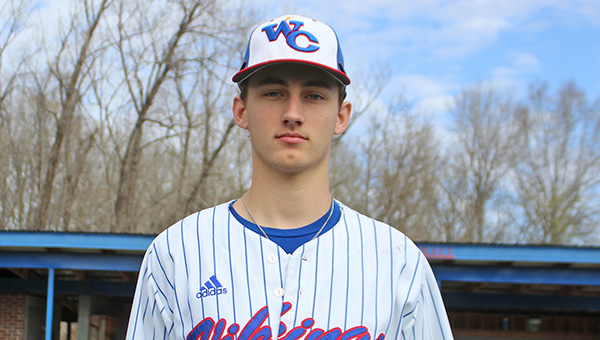 Warren Central baseball player Preston Lynch tripled and drove in four runs in a 15-2 win over Terry on Thursday.

With a bit of emphasis, Warren Central secured its spot in the MHSAA Class 6A baseball playoffs.

Warren Central (10-11, 3-4 MHSAA Region 6-6A) snapped a three-game losing streak. It still has two region games remaining, Monday against Northwest Rankin and Tuesday at Pearl — both are on the road — and can earn the No. 2 seed if it wins both and Pearl loses its last two region games.

“When you set your goals, you always want to win your district. But any time you get into what we call Season No. 3 anything can happen. You get more time to get better,” Warren Central coach Randy Broome said.

McCurley hit a two-run double in the first inning and scored on a sacrifice fly to get Warren Central started on Thursday. After Terry cut it to 3-2, the Vikings added three more runs in the third inning and then exploded for nine in the fourth.

Lynch hit a two-run triple in the third inning and scored on an error to make it 6-2. McCurley, Floyd Davenport and Seth Sterling each hit an RBI single in the fourth, and Blake Channell drove in two more with another single.

Jack Wright retired the side in the top of the fifth to end the game via the mercy rule.

It was Warren Central’s second consecutive run-rule victory — it beat Tensas Academy 21-0 last weekend — and two of its three region losses have been by one run. As they head toward the postseason, Broome said the improving offense is a good sign.

“We haven’t pitched it bad this year, and defensively our fielding percentage is probably the best we’ve had in a while. When you throw strikes and play defense you’re always going to be in the ballgame,” Broome said. “We we’re having a problem with this year is getting that timely hit.”

The Class 6A playoffs begin April 22. If Warren Central finishes third in Region 6-6A it will face Biloxi in the first round, with Games 1 and 3 on the Coast and Game 2 at Viking field on April 23.

It’s a different path through the playoffs than the Vikings are used to. They’ve been in the North half of the bracket for the past 15 years and often run into some of the best teams in it. They’re in the South this time, which will bring with it new opponents and challenges.

“We’ve got some contacts down south. We’ve been down to the Coast for spring break trips so it’s familiar but not,” Broome said. “For whatever reason the North, every time we matched up with somebody early it seemed like it was the top seed. Now it’s unfamiliar. You haven’t seen them with your own eyes.”