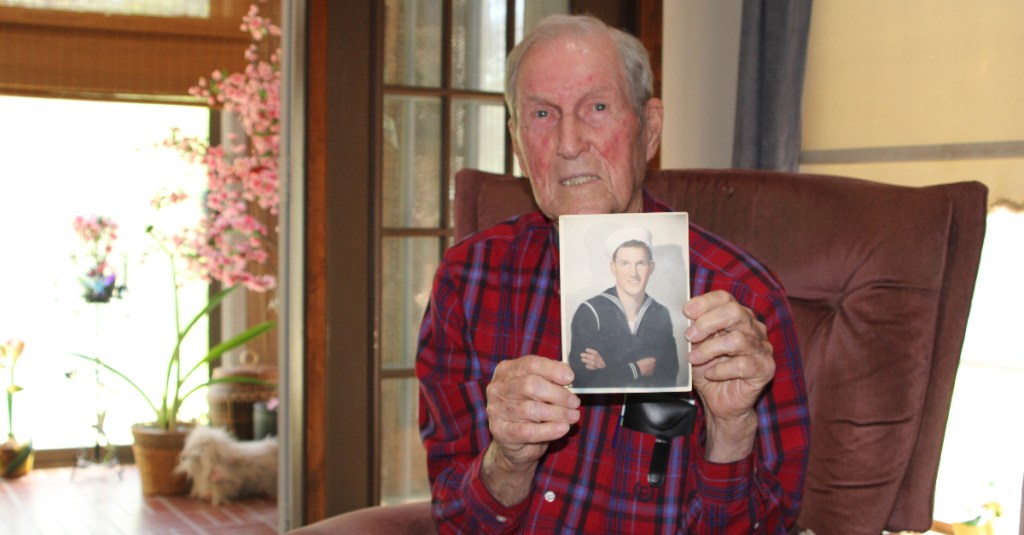 Vicksburg resident Wilbur Nations holds a photo of himself in the U.S. Navy. Nations turns 100 on Monday. (Photo by John Surratt | The Vicksburg Post)

Wilbur Nations’ family and friends will gather on Monday at the house he designed and built to celebrate a milestone — his 100th birthday.

“Lots of people and food,” he said.

And in the years since his birth, Nations worked in the Civilian Conservation Corps during the Great Depression, worked several times as a surveyor for the Mississippi State Highway Department (now the Mississippi Department of Transportation), Waterways and other companies, was a Navy Seabee and spent years covering the globe as an engineer for International Paper.

It all began on April 18, 1922, in Lincoln County, where Nations was born and continued in Lorman, where his family moved in 1928.

“That’s where I was raised,” he said.

He joined the Civilian Conservation Corps in 1939 at 17, “and we worked at the Military Park. We cut the grass. That’s about the only thing we did was get the grass cut and we cleaned the monuments. It (the park) was bigger than it is now; a lot bigger.”

After two years with the CCC, Nations joined the state Highway Department as a surveyor in the Natchez area.

“We built Highway 84 and Highway 18; we covered three counties,” he said.

He left the highway department in 1940 and joined an engineering company that built Camp Van Dorn, an Army training base in Centreville, before enlisting in the Navy Seabees in 1942.

“When I volunteered in 1942, I did boot training at Norfolk, Va., and then we were sent overseas,” he said. “I didn’t have any leave until I got back in the states — almost three years. They put us on a train and we went to Oxnard, Calif., and they put us on a ship headed for New Caledonia.”

Nations said his unit was a specially selected battalion that handled cargo, “take the material in and ship it out.”

It was a mission that took him not only to New Caledonia but also to Guadalcanal in the Solomon Islands, then to the Marshall Islands, Saipan in the Marianas Islands and Guam before he returned to the U.S.

“As they took the islands, we were right behind them handling cargo; no fighting, cargo handling,” he said. “We had another Seabee crew that went in ahead of us and built the buildings and the piers and we followed behind. It was tough; we worked seven days a week handling cargo.”

“Waterways later laid me and some others off — five of us,” he said.

He returned to the state surveying counties for new highway locations.

“We had five counties,” he said.

Nations left the highway department to work as a surveyor for Ford Bacon and Davis, a construction company laying a natural gas line from Oxford, Miss., to Atlanta, Ga.

From there, he went to work for International Paper as a field engineer.

“I was in the construction end of IP; whether we had to add on to the paper mill or build a new mill,” Nations said. “I stayed with them 37 years building new mills and repairing mills. I worked in five countries in Europe, five in the west. I went to Japan and the Philippines in 1970.”

He said he stayed in the River City, because his daughter lives in Vicksburg.

“We bought this lot and built this house; building it yourself is a lot cheaper in the long run,” Nations said.

Looking at turning 100, Nations said, “It’s been tough, I’ll tell you. The oldest person in our family lived to be 80. My father’s father lived to be 104; I guess I have some of his genes.”