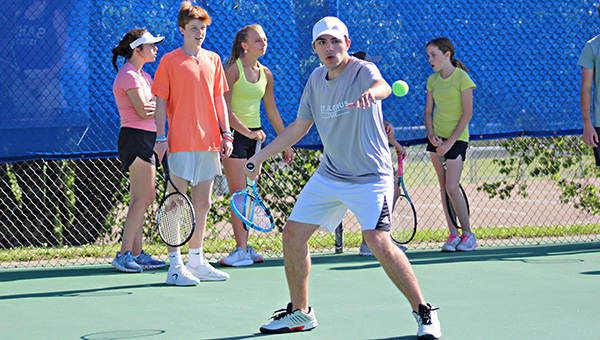 A decade or so ago, the tennis courts at Halls Ferry Park were an adequate resource for local players.

There were a handful of hard courts that hosted the occasional weekend tournament and recreational players during the week.

Some in the city’s tennis community had a bigger vision, though, and felt the facility could do a lot more.

Rick Shields, the director of the city of Vicksburg’s tennis program, along with others in city government and its parks and recreation department, led the charge for an overhaul of the courts. A new pavilion was built. Existing courts were upgraded and 10 new ones were built. A set of pickleball courts opened last fall for players of that fast-growing game, and hosted its first large tournament earlier this month.
All of it came with the idea that Halls Ferry Park could be a valuable resource not just for the tennis community in Vicksburg, but Mississippi as a whole.

“We want to be a tennis Mecca,” Shields said.

For the next few weeks, it will be.

Between April 21 and May 4, Halls Ferry Park will host five high school playoff tournaments and one state-level senior tournament.

The Mississippi 65 and over Senior Championship is scheduled for April 22-24.

What makes this upcoming stretch impressive is that none of the high school tournaments will involve Warren County teams.

Warren Central and Vicksburg did not qualify for the MHSAA’s team tournament. St. Aloysius hosted the MAIS District 3-5A tournament earlier this week, but it will go to Brookhaven for the South State tournament and Ridgeland for the state tournament.

The lack of local teams speaks to how officials in the state’s various associations view Vicksburg and its tennis facility. Even without a local team to spur attendance, Halls Ferry Park itself has become a major draw.

“We’re looking to promote this place as much as possible. That’s why we got the teams from the (MAIS) north, was because they played here and liked it so much they told the MAIS they wanted to play here.” Shields said. “This place has come a long way over the years, from four courts to 14 and a raggedy building to a $1 million clubhouse.”

Halls Ferry Park has hosted several MAIS playoff tournaments and Mississippi Tennis Association events since the expansion was completed in 2016. Alcorn State and other schools have played a number of college matches there as well. Vicksburg has one of the largest tennis facilities in the state, which helps large tournaments flow faster.

“It’s not just the facility. It’s how we run it. Things run smoothly. We put the effort behind it,” Shields said.

They sure have, and not just while matches are going on. The vision of a facility that could rival any in Mississippi has become a reality. Shields, former Parks and Recreation director Joe Graves, and the others who helped make it happen should take a bow. They’ve all given Vicksburg a jewel to be proud of.

Ernest Bowker is the sports editor of The Vicksburg Post. Email him at ernest.bowker@vicksburgpost.com