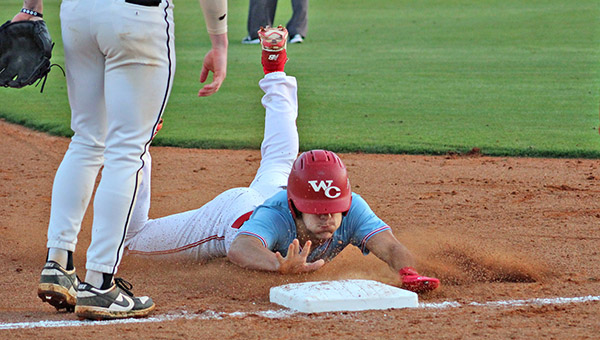 FLOWOOD — By the third inning of their game with Northwest Rankin on Monday night, the outcome did not matter for Warren Central. It doesn’t mean they wouldn’t have liked it to be a little better, though.

Warren Central and Pearl will still play Tuesday at Pearl, in a game that is now essentially a scrimmage.

“We’ll get some guys some action that haven’t and that can possible help us in the playoffs. We’re going to treat it as a setup game tomorrow, especially now after it’s played out, and really hope to see them compete all the way around,” Warren Central coach Randy Broome said.

Warren Central still earned the No. 3 seed in Region 6-6A will begin the Class 6A playoffs with a first-round, best-of-three series against Biloxi. Game 1 is Friday at 7 p.m. at Biloxi, Game 2 is Saturday at 3 p.m. at Viking Field, and if a Game 3 is needed it will be Monday at 7 p.m. at Biloxi.

“We match up with Biloxi now, and I feel like it’s a pretty good matchup for us,” Broome said. “It’s the trip you’re worried about. We haven’t been this far on a bus yet. So that’s part of it. We’ll stop in between and hopefully keep our legs under us.”

They’ll also try to get their legs back under them after an outing against Northwest Rankin (24-2, 8-0) that was a mixed bag of good and bad.

On the positive side, the Vikings continued an upward offensive trend by scoring seven runs against one of the top teams in Mississippi. Kylan Landers hit a two-run home run and Cade Fairley hit an RBI double that gave them a 2-0 lead in the top of the first.

On the negative side, their fast start was quickly wiped out by the Cougars’ own. Three consecutive walks and a hit batter brought in two runs before Powell’s grand slam gave Northwest Rankin a 6-2 lead. Monistere homered in the second inning, then Ingram hit a solo home run in the third as the Cougars scored six more runs to blow the game open.

Monistere hit an RBI double in the fourth inning and Northwest Rankin finished it via the mercy rule on a sacrifice fly by Dawson Munzenmay in the bottom of the sixth.

“Where we’ve struggled this year is in the box, and these last few games we’ve been swinging it pretty good. Scoring seven runs and still getting 10-runned really doesn’t show it. But for the most part seven runs would have won us a lot of games this year. That part, I’m excited about,” Broome said. “That part of the game, I’m pleased. Unfortunately there’s two others that matter and the two others we didn’t do a very good job with tonight.”