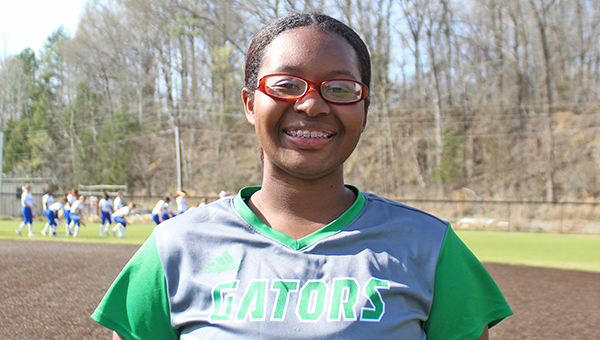 Vicksburg High softball player JaMia Grace had her team's only hit in a 10-0 loss to Germantown on Tuesday.

The Vicksburg Missy Gators did not hit the right notes in their softball playoff tuneup.

Anna Leigh Ashley and Kaleigh Stevenson each had two hits and three RBIs, Meg Glasgow went 3-for-4 and scored four runs, and Germantown handed the Missy Gators a 10-0 loss Tuesday in their regular-season finale.

Vicksburg (9-11) only had one hit — a single by JaMia Grace in the top of the third inning.

Germantown (18-9) eased out to a 3-0 lead through three innings, then scored six times in the fourth to blow it open on the way to a run rule victory. Stevenson hit a two-run triple and scored on a double by Addison Lindley to key the fourth-inning rally.

Lindley finished the game 2-for-4 with two RBIs and two runs scored.

The loss ended Vicksburg’s regular season, but it still has plenty of softball left to play. The Missy Gators clinched the MHSAA Region 4-5A championship last week when Jim Hill forfeited the second of two scheduled meetings this season.

The region title gave Vicksburg a first-round bye in the Class 5A playoffs, so their next game will not be until the second round begins on April 29. Vicksburg will face the winner of this weekend’s series between Ridgeland and Columbus.

Elizabeth Pullen went 3-for-4 with one RBI and one run scored, and Crews Boyer had two RBIs for Madison Central (14-9), which won its sixth game in a row and avenged an early-season loss to the Lady Vikes.

Tyra Bridges and Lola Crozier had two hits apiece for Warren Central, which split a pair of playoff tuneup games this week. The Lady Vikes defeated Loyd Star 8-4 on Monday.

Warren Central (18-9) will be back in action Friday when the MHSAA Class 6A playoffs begin. It will host Harrison Central in Game 1 of the best-of-three series at 6 p.m., and then travel to the Coast for Game 2 Saturday at 2 p.m. If a Game 3 is needed, it will be Monday at 6 p.m., back at Warren Central.