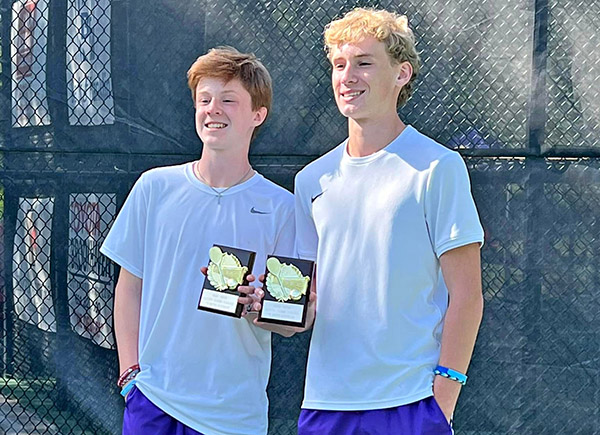 St. Aloysius tennis players James Powell and Walker Lambiotte show off their trophy after they won the MAIS Class 5A South State No. 2 boys doubles championship on Tuesday. (Karen Taylor/For The Vicksburg Post)

The No. 1 boys doubles team of Noah Taylor and Ryan Davidson, and the No. 2 girls doubles team of Carrie Woods and Olivia Larson also advanced to the state tournament April 28 in Ridgeland.

The No. 1 girls doubles team of Maggie Roberson and Ali Blackburn lost earlier in the South State tournament.

The Mississippi High School Activities Association will also play the finals of its team playoffs at Halls Ferry Park on Thursday. The Class I championship match between Tupelo Christian Prep and Sacred Heart, and the Class 3A final will start things off at 10 a.m.

At noon, New Albany and Stone will play in the Class 4A final, and Lafayette and Vancleave will meet for the Class 5A championship.

The Class 6A championship match featuring Madison Central and Ocean Springs wraps up the action at 2 p.m.