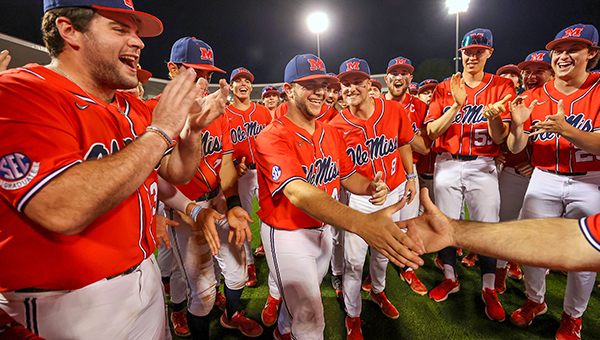 Ole Miss pitcher Dylan DeLucia celebrates with his teammates after the Rebels beat Mississippi State 4-2 on Thursday. DeLucia pitched a complete game to lead the Rebels to the win. (Josh McCoy/Ole Miss Athletics)

OXFORD — Ole Miss started the weekend by doing something it hadn’t been able to do all season.

Dylan DeLucia pitched a complete game, and Kevin Graham and Hayden Dunhurst both homered as Ole Miss beat Mississippi State 4-2 on Thursday in the opener of a three-game series at Swayze Field.

Ole Miss (22-15, 6-10 Southeastern Conference) snapped a three-game losing streak overall, and won its first SEC home game of the season. It was swept by Tennessee and Alabama in two previous weekend series in Oxford.

DeLucia pitched Ole Miss’ first complete game this season, and just the second since 2014. He allowed five hits and two runs — a pair of solo home runs by Brad Cumbest and Kellum Clark — did not walk a batter and struck out a career-high eight.

DeLucia threw 117 pitches and earned his third win in as many starts.

The Rebels took advantage of an error to jump ahead 3-0 in the first inning. A­­fter Justin Bench and Kemp Alderman reached on a leadoff single and infield error, respectively, Graham pulled a pitch into the student section, setting off the showers and giving Ole Miss an early lead.

Mississippi State got a run back on Cumbest’s solo home run in the fifth, but the Ole Miss got the run right back as Dunhurst hit a home run of his own to extend the Rebels’ lead to 4-1.
Clark’s home run with two outs in the seventh cut it to 4-2, but that’s as close as the Bulldogs (22-17, 6-10) got.

DeLucia retired the last seven batters he faced to lock down the victory.

Mississippi State and Ole Miss will play game two of the series Friday at 6:30 p.m., and finish it Saturday at 3:30 p.m. The finale will be televised on ESPN2.

The Bulldogs and Rebels will also play Tuesday at Trustmark Park in Pearl, in the annual Governor’s Cup game. That contest will begin at 6 p.m.