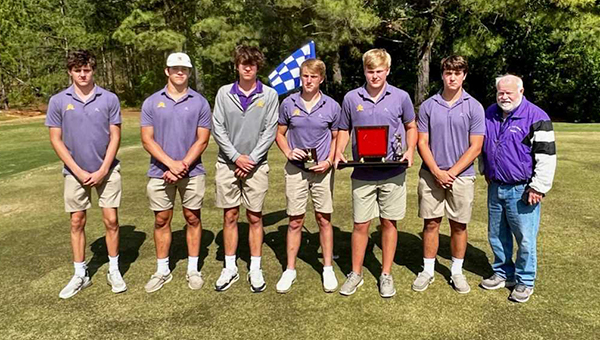 Joshua Larsen shot an 83 to finish third in the individual standings, Will Keen was another shot back in fourth, and St. Aloysius’ boys golf team posted a second-place team finish Wednesday at the MAIS Class 5A South State tournament in Wesson.

The Flashes totaled 342 strokes as a team, four behind champion Central Hinds. Bowling Green was a distant third, at 387, and Columbia Academy fourth at 400.

Larsen and Keen led a balanced effort for St. Al. Their top five golfers all shot 90 or better, with Thornton Fortenberry at 86, Caleb Tucker at 89 and Chase Tucker at 90. Greyson Simmons shot 99. The top four golfers count toward the team score.

Madison-St. Joseph’s Raines Walker — his team’s only player — was the medalist, after shooting a 78. Central Hinds’ Jordan Jefferies was second, with a 79, and Larsen was third. Keen and Central Hinds’ Seth Ball tied for fourth at 84.

The Class 5A state tournament is Monday in Cleveland.