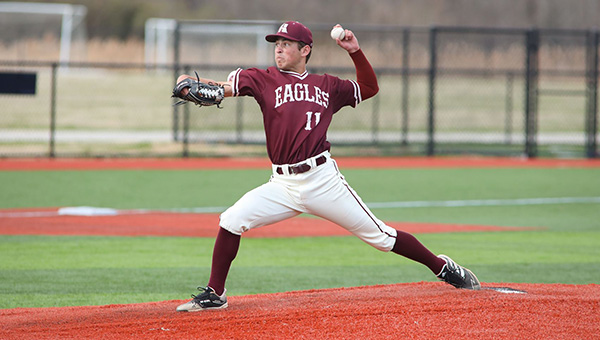 Reed finished 2-for-4 with two RBIs and two runs scored, and Justin Williams also had two hits and scored twice for Hinds (22-14, 15-7 MACCC).

Nation pitched a seven-inning complete game. He scattered four hits and walked two batters while striking out four, to earn his third win of the season.

“That was a much-needed victory today, led by Connor Nation, who was outstanding,” Hinds head coach Dan Rives said. “He mixed all three pitches effectively and kept a very good offense off balance all day. He was also backed by our best defensive effort of the year, as we were very clean and made some big time plays on that side. I thought the fourth inning was huge for us, as we gained a little bit of a cushion by getting three runs with two outs. I was very proud of our effort all around today.”

East Central won the first game of the doubleheader, 8-3, on Wednesday. The second game was postponed a day because of rain and thunderstorms that moved through the Raymond area shortly after it began.

Reed had three hits in game one, and Williams was 2-for-5 with a home run, double and one RBI. Former Vicksburg High star Kendrick Bershell pitched two innings for Hinds and allowed two runs.

The Eagles are back in action Saturday when they host Coahoma Community College in Raymond for sophomore day. The doubleheader is scheduled to begin at 2 p.m.