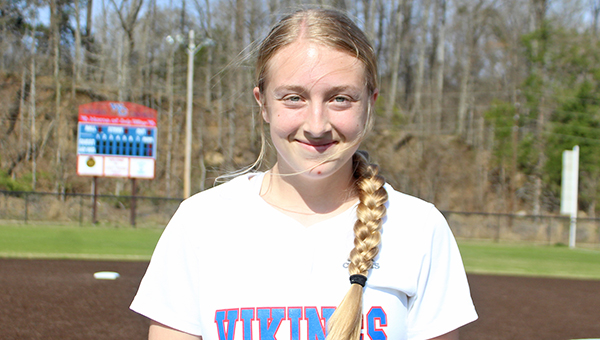 Warren Central pitcher Annalyn Nevels had five strikeouts in three innings of relief in a 3-0 loss to Harrison Central in Game 1 of their MHSAA Class 6A softball playoff series on Friday.

Gabriel Smith pitched a no-hitter and only allowed two baserunners — one hit batter and another on an error — as Harrison Central defeated Warren Central 3-0 in Game 1 of their MHSAA Class 6A softball playoff series.

Warren Central (18-10) will travel to Harrison Central for Game 2 on Saturday at 2 p.m. The Lady Vikes must win to force a deciding Game 3 Monday night back at Warren Central.

Kyla Marsh had two hits and scored two runs for Harrison Central (8-10), and Smith hit an RBI single in the third inning.

Smith did most of the damage with her pitching arm, though. She retired 21 of the 23 batters she faced, including the first 12. Warren Central did not have a batter get on base until Abby Morgan reached on an error to lead off the fifth inning. She then retired the next six before hitting Sarah Cameron Fancher to start the seventh inning.

Smith recovered, though, and set down the last three batters to close things out.

Smith outdueled Warren Central pitchers Morgan and Annalyn Nevels, who combined for 12 strikeouts and only one walk. Two of Harrison Central’s three runs were unearned.