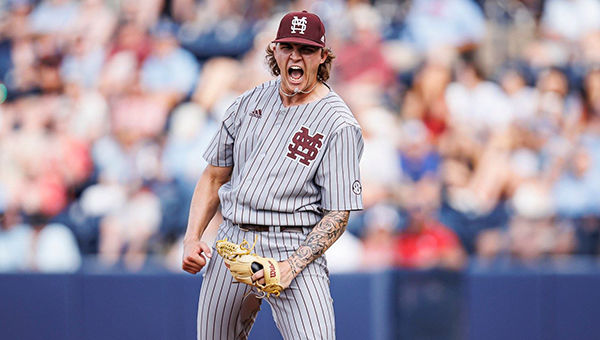 OXFORD — Ole Miss’ late-inning heroics were only surpassed by the ones from Mississippi State.

Ole Miss’ Jacob Gonzalez hit a game-tying two-run home run in the bottom of the ninth inning, but Mississippi State’s Brad Cumbest hit a solo homer of his own in the top of the 11th to give the Bulldogs a 7-6 victory over their archrivals on Saturday.

Cumbest’s home run was his second of the weekend. He batted .538 (7-for-13) in the three-game series, with no hit bigger than the last that gave Mississippi State (24-17, 8-10 Southeastern Conference) the series victory.

The Bulldogs took two of the three games at Swayze Field for their sixth consecutive series victory over Ole Miss (22-17, 6-12). The teams will play again Tuesday at Trustmark Park in Pearl in the annual Governor’s Cup game, which does not count in the SEC standings. First pitch is at 6 p.m.

Ole Miss has won one of its nine SEC home games this season. After the midweek rematch against Mississippi State, it will go on the road to play Arkansas next weekend.

Mississippi State led 6-2 after Hunter Hines hit a three-run home run in the fifth inning and R.J. Yeager hit a two-run shot in the sixth.

Ole Miss scored twice in the bottom of the sixth, and then in the ninth Gonzalez followed a one-out single by Justin Bench with his second home run of the game over the right field wall to tie it at 6.

Gonzalez finished 2-for-3 with three RBIs.

Neither team scored in the 10th, and Cumbest sent a ball over the left field wall with one out in the 11th to put the Bulldogs back in front. K.C. Hunt retired the side in order in the bottom of the 11th to close it out.

Hunt (2-1) pitched 2 2/3 innings of scoreless relief to earn the win. He did not allow a hit or a walk, and struck out two batters.