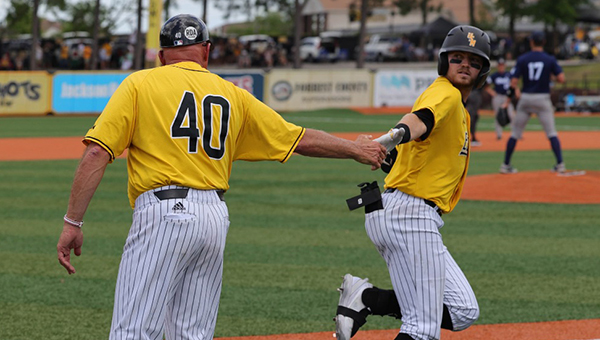 Blake Johnson homered during a five-run outburst in the fifth inning, and three relievers combined to throw seven scoreless innings as Southern Miss beat Rice 6-3 on Saturday for its 13th consecutive victory.

Southern Miss (31-8, 15-2 Conference USA) won its sixth straight weekend series and will go for its third sweep in a row in the finale Sunday at 1 p.m. The current 13-game win streak ties the 1995 and 2015 teams for the second-longest in school history.

Rice (11-28, 4-13), which was shut out in Friday’s opener, got off to a fast start Saturday. Justin Long and Aaron Smigelski both hit RBI singles to give the Owls a 3-1 lead through three innings.

Will McGillis hit a solo home run in the second inning, and finished with three hits, but Southern Miss didn’t really get rolling until the sixth. The Golden Eagles had five hits and scored five runs to take the lead for good.

Southern Miss’ bullpen handled things from there. Starter Hunter Riggins only lasted two innings, but relievers Isaiah Rhodes, Drew Boyd and Dalton Rogers only allowed one hit and three walks — and no runs — in their extended outing. They combined for 12 strikeouts.

Rhodes (3-0) pitched three innings and was credited with the win. Rogers worked the last two for his third save of the season.