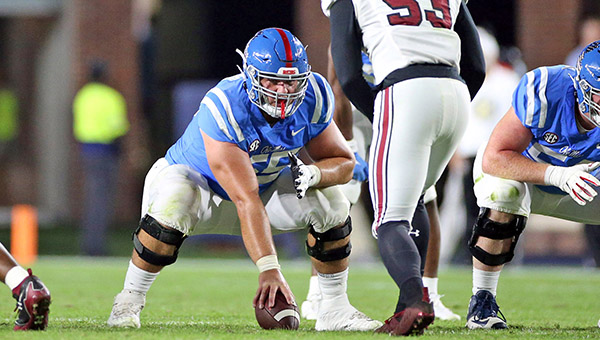 Throughout his football career, Ben Brown said, there have been tiny moments where it hit him that he’d arrived at the next level.

Playing together with his older brother, Bash, for the first time as a member of St. Aloysius’ varsity high school team. Walking across campus to his first class at Ole Miss while decked out in team gear.

And, recently, being surrounded by more than 300 of this year’s other top college players at the NFL Scouting Combine in Indianapolis.

“When it hit me in regards to the NFL, was arriving at the combine and seeing all of these amazing athletes and these guys who could potentially be NFL Hall of Famers,” Brown said. “Just to even be included in that is remarkable.”

Brown, hopefully, will get to join them in a different sense next weekend when the 2022 NFL Draft is held in Las Vegas. The Ole Miss offensive lineman is hoping to be among the 262 players selected in the draft, which begins April 28 and concludes April 30.

Brown, a Vicksburg native who starred at St. Aloysius, is projected as a late-round pick on the final day of the draft — rounds 4-7 are on April 30 — or get an offer as an undrafted free agent. Whatever his path, Brown should get a chance with an NFL team and he’s eager for the opportunity.

“I’ve got an exciting future ahead of me. I’m getting married in June and then figuring out what team drafts me or whether I go undrafted or not. I’ve got a lot going on in my life, but I’m blessed to have all of that going on in my life,” Brown said. “It’s been a very special past few months — stressful, but special. I know that I’m unique to be in this situation, so I take every day as a blessing.”

The pre-draft process has not been easy for Brown. He started 40 consecutive games over 3 1/2 seasons for Ole Miss before suffering a torn bicep tendon in his left arm in the final minutes of a win over Tennessee on Oct. 16.

The injury required surgery, ended his season, and began a rehab proccess that carried through the spring. It was also as big a mental blow as a physical one. Brown had never before suffered a major injury, and had been one of Ole Miss’ ironmen. During his consecutive starts streak he not only never missed a game, he rarely missed a play. In 2020, he played all 816 of Ole Miss’ offensive snaps.

“It definitely was tough having an injury like that, where I can no longer physically do anything for my football team. I’d never, in high school or college, had something like that happen to me before,” Brown said. “My remaining time at Ole Miss I tried to contribute, but it was definitely mentally through my leadership skills and trying to keep guys positive.”

Brown has spent the past six months rehabbing his injury in Oxford and Frisco, Texas, while going through the pre-draft proccess in a much different way than he ever imagined.

He was not able to fully work out either at the combine or at Ole Miss’ pro day — he was able to do some limited position drills at the latter — so he’s had to impress teams in interviews and convince them he’s physically fit enough to play.

Earlier this month, Brown had to return to Indianapolis for a follow-up exam and meetings with NFL team doctors to update them on his status. He said he’s recovered from the injury.

“A whole lot of interviews with teams and medical stuff,” Brown said. “I didn’t participate in the combine or drills for pro day. All I did was about five minutes of position work. Teams just wanted to see me moving and stuff. Obviously they knew I couldn’t bench press or anything, so they wanted to see if I was still in shape. I thought that was the best I’ve ever moved. I was very smooth. That was a big relief.”

Heading into last season, Brown was projected as high as a third- or fourth-round pick. He’s now considered a late-round selection or possibly an undrafted free agent.

While injury questions will remain until he can prove himself on the field, Brown feels he has a lot of strengths he’s been able to show already.

During his college career he played both center and right guard, which could help him earn a spot as a versatile backup in the NFL. And, even with the injury, starting 40 consecutive games in the highly competitive Southeastern Conference allowed him to showcase his durability and skill against NFL-caliber talent every weekend.

Brown was selected to the 2018 All-SEC Freshman team and most 2021 preseason All-SEC lists. He also showed leadership as a four-year starter and Campbell Trophy semifinalist.

“A big thing for me is my game experience,” Brown said. “I started four years straight, 40 straight games. There’s a lot of durability aspect to that. As well as playing center and right guard. Versatility and durability are two very big factors that are helping me through this process. I’m showing I can be a plug-and-play player wherever I’m needed.”

Where Brown will end up is very uncertain. He said he’s talked to most of the 32 NFL teams at some point over the past few months, and late-round picks are highly unpredictable. Most teams select the best player available overall at that point in the draft, or try to add depth at a position of need.

Even while trying to sort through the clues, Brown said, he has no idea who might call next weekend.

“There can be teams that will talk to you a lot but they may not have any interest in drafting you. But then there’s some teams that will not talk to you at all, but you’re high up on their draft board. It’s crazy,” Brown said. “You have to look through it all and really critically think what team needs a player in your position. I’m a versatile, durable offensive lineman and I need to think what team really needs that and what team am I likely to play the most at. It’s a very complicated process.”

No matter who takes him, Brown added, the goal is the same — make them happy they did, and make the most of the opportunity. Even if he goes undrafted, he doesn’t have to look far to see that it is possible to do both.

His former St. Aloysius teammate DeMichael Harris signed as an undrafted free agent with the Indianapolis Colts in 2020. Harris spent most of the past two seasons on the practice squad, but has played in 10 regular-season games and is still with the team on a futures contract.

Another Vicksburg native, Malcolm Butler, has played seven NFL seasons and won two Super Bowls since signing as an undrafted free agent with New England in 2014.

“All I need is an opportunity and that’s how I’m looking at it,” Brown said. “I’m preparing each and every single day for that opportunity, for that chance. I’m not wondering when it will come because a chance will come and I just need to be prepared for it.”

Brown’s draft day plans, he said, are low key. He’ll come back to his hometown of Vicksburg and spend time with family and his fiancee, enjoying some quiet — if tense — time waiting for the phone to ring.

Every time it does, he laughed, he’ll answer it.

“Any alert or phone call I will hear that day, I’ll feel like I have PTSD or something. I’ll just be so alert and anxious to see what it is,” he laughed. “I might answer 20 spam phone calls. That phone is going to be ringing and I’m going to answering.”