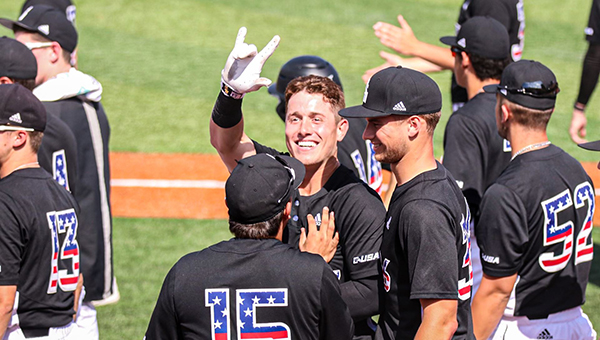 Another weekend, another sweep, and a school record. This is turning into quite a baseball season in Hattiesburg.
Hurston Waldrep struck out 12 batters and allowed two runs in a complete-game victory, Carson Paetow hit a grand slam, and Southern Miss beat Rice 12-2 in Sunday’s series finale at Pete Taylor Park.

Southern Miss (32-8, 16-2 Conference USA) tied a school record with its 14th win in a row, and it has won 22 of its last 24 games overall. The winning streak has included three consecutive series sweeps.

Southern Miss will try to achieve the program’s longest winning streak ever when it heads to Southeastern Louisiana on Tuesday night.
The win, coupled with a Louisiana Tech loss, also gave Southern Miss a four-game lead with 12 games left in the regular-season C-USA race. Southern Miss won the season series between the two teams.

“We came out and are just trying to play consistent baseball,” Southern Miss coach Scott Berry said. “We are picking up where we left off yesterday. We just want to maintain the level of baseball that needs to be played to win baseball games.”

Waldrep’s pitching performance was the latest in a string of outstanding outings for the Golden Eagles this weekend. Tanner Hall had 13 strikeouts in eight innings in a 1-0 win in Friday’s opener, and three relievers combined to throw seven shutout innings in a 6-3 win on Saturday.

Waldrep gave up two runs on a home run by Nathan Becker in the fourth inning, and allowed five hits and three walks total. But he also worked out of trouble several times, lasted through seven innings, and got a lot of support from his offense.

Will McGillis and Reece Ewing each hit RBI doubles to help the Golden Eagles to a 5-2 lead through five innings. They then erupted for seven runs in the bottom of the seventh inning to end the game via the mercy rule.

Christopher Sargent had the second of his two RBI singles to drive in the first run of the seventh inning, and he later scored on a sacrifice fly by Danny Lynch. Paetow finished things off with a two-out grand slam over the center field fence.

Paetow finished 3-for-4 with the home run, a double, four RBIs and three runs scored. He was one of five Golden Eagles with multiple hits. Lynch had two hits and two RBIs, Ewing and Sargent both had two hits and scored two runs, and Dustin Dickerson was 2-for-4 with one run scored.