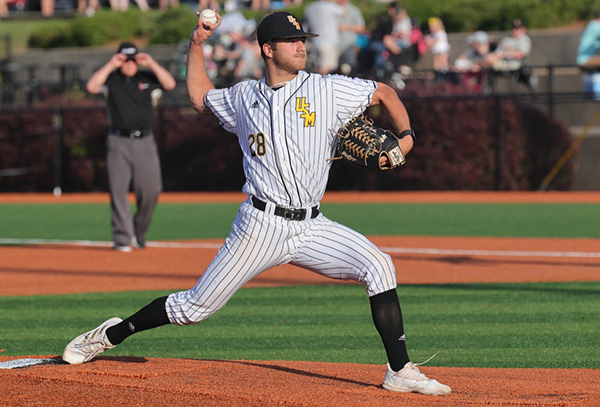 Southern Miss raked in another award and creeped closer to the top of the college baseball polls on Monday.

Tanner Hall was named the Conference USA Pitcher of the Week, as well as being selected as one of Collegiate Baseball’s National Players of the Week, after his stellar outing Friday night against Rice.

Hall has 90 strikeouts on the year with just seven walks. Through Sunday’s games, the sophomore right-hander ranked No. 4 nationally in strikeout-to-walk ratio, No. 9 in walks per nine innings (0.97) and strikeout total, and No. 12 in both victories (7) and WHIP (0.86).

It’s the fourth time this season that a Southern Miss pitcher has been selected as the C-USA Pitcher of the Week. Hall also earned the award for the week of March 14, and Hurston Waldrep has won it twice.

Hall’s Friday outing helped start a three-game sweep for Southern Miss. Sunday’s 12-2 victory was its 14th in a row to tie a school record. The Golden Eagles can break the record by beating Southeastern Louisiana on the road on Tuesday night.

Southern Miss also moved up two spots to No. 4 in this week’s D1baseball.com rankings, one spot to No. 5 in the USA Today coaches poll, and are in the top 10 of several other national polls.

Southern Miss is No. 12 in the NCAA’s RPI rankings — down two spots from last week following the sweep of last-place Rice — that help determine NCAA Tournament seedings. The Golden Eagles lead the Conference USA standings by four games with 12 remaining.