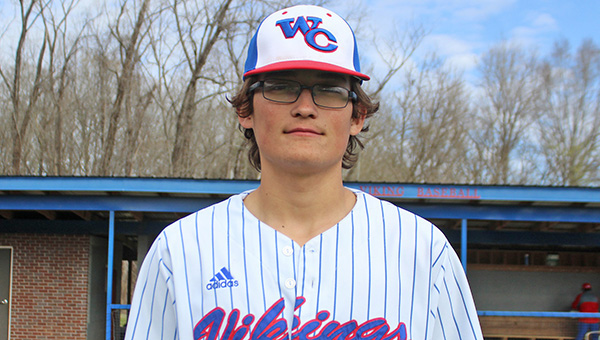 Warren Central's Kylan Landers pitched three-plus innings and drove in two runs with a double in a 6-3 loss to Biloxi in Game 3 of their MHSAA Class 6A baseball playoff series on Monday.

Warren Central put together a heroic last stand Monday night, but it turned out to be exactly that.

Entering the seventh inning down by six runs, the Vikings scored three and got the tying run to the plate before running out of steam and outs. Bryson Pisarich struck out Floyd Davenport swinging on a full-count pitch, and Biloxi fended off Warren Central 6-3 in Game 3 of their MHSAA Class 6A baseball playoff series Monday night.

Biloxi (14-15) advanced to face Region 5-5A champion Brandon in the second round. Warren Central finished its season with an 11-15 record and was eliminated in the first round of the playoffs for the second season in a row.

The Vikings had rebounded to win Game 2 of this series after dropping Game 1, but couldn’t quite find the right touch to come all the way back and win the series.

Logan Fontenelle pitched six-plus innings for Biloxi, and also went 2-for-3 with three RBIs. His two-run single was part of a four-run rally in the fourth inning that put the Indians ahead 4-0, and in firm control of the game.

Ja’Darius Hartley hit an RBI single in the bottom of the sixth inning, and then scored on an error, to push the Indians’ lead to 6-0. Warren Central, though, did not go quietly into the offseason.

Fontenelle left the game after giving up a single to Braxton McCurley and hitting Cade Fairley with a pitch to start the inning. Pisarich replaced him and gave up a single to Jack Wright, followed by a two-run double to Kylan Landers. Wright scored on a groundout to make it 6-3 with two outs.

Pisarich walked the next batter to bring the tying run to the plate, and needed seven pitches to finish off a fesity at-bat by Davenport — who batted .500 (6-for-12) in the series — to end the game and the Vikings’ season.

Warren Central outhit Biloxi 6-5, but hit into two double plays and left two runners on base in two different innings.

Landers pitched three innings and was charged with allowing three runs, despite not giving up a hit. He loaded the bases in the fourth inning on two walks and a hit batter before exiting. Connor Watkins replaced him and gave up run-scoring singles to Aiden Harrison and Fontenelle. Watkins wound up pitching into the sixth inning.