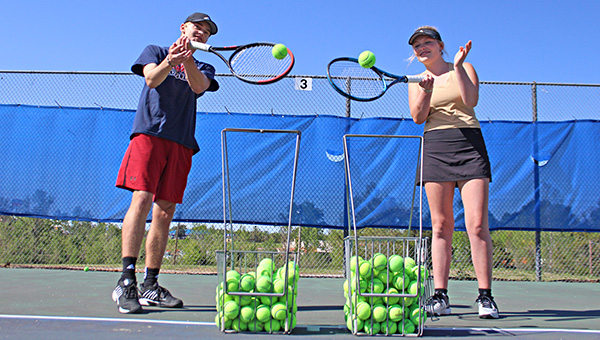 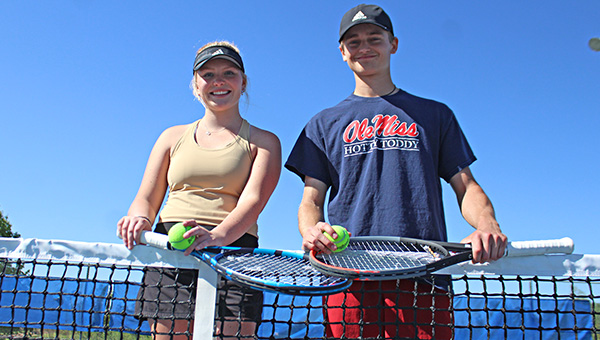 For the past five years, Gordon Wilkerson and Audrey Jennings have been mainstays of Warren Central’s tennis roster.

Wilkerson, a senior, and the junior Jennings will compete as a mixed doubles team in the MHSAA Class 6A individual tournament April 28 and 29 in Oxford. They’ve only lost once this season and are hoping to keep that hot streak going deep into the state tournament.

The other classifications will begin play April 26, after the start of the tournament was postponed one day because of the threat of inclement weather.

“Last year we went in and won the first round and lost in the second round. We’re definitely better this year, so I think we have a pretty good chance to make it further than the second round,” Wilkerson said.
Wilkerson is in the state tournament for the third year in a row. He played in boys doubles as a freshman in 2019, and in mixed doubles with Jennings in 2021.

Jennings is in her fourth state tournament in five years — there was no tournament in 2020 because of the COVID-19 pandemic — with all of those appearances coming in mixed doubles. She reached the Class 6A quarterfinals alongside Wilkerson’s older brother George in 2018, and won the Region 4-6A championship with John Jabour in 2019.

She then teamed up with Wilkerson last year and the two found a winning formula. They reached the second round of the Class 6A individual tournament in 2021 and have been nearly unbeatable in 2022. Their list of victories includes the Region 6-6A championship earlier this month.

“We have a similar style when we play, but when you get paired with someone that you don’t play similar with it’s hard,” Jennings said. “We’ve played so long together that we just know what to do. If I move, he knows where to move and it’s already set up in our minds. It’s not like you have to figure it out or constantly talk about it. We’re good to go with it.”

Jennings added that with both being upperclassmen now, their combined experience — separate and together, in both high school and junior matches — has made for great chemistry.

Warren Central coach Steve Summers said it’s also helped other players on the team. The Vikings did not qualify for the Class 6A team tournament, but Wilkerson and Jennings have set a good example for the numerous young players on the roster.

“I had 29 kids and 20 were seventh-, eighth- or ninth-graders. They look to kids like this to see how they handle themselves on the court, how they practice, to the way they interact with their teammates,” Summers said.

They’re all hoping that the up-and-coming players on the roster can soon look at them as champions. Wilkerson and Jennings are the No. 7 seed in the 16-team mixed doubles bracket and will play Biloxi’s Mikenzi Dubrow and Cy Smith in the first round.

They’d likely have to play No. 2 seed Kennedy Hutto and Luke Rhoden of Madison Central in round two, but Jennings believes the draw is a bit more even than in some recent seasons.

“I think the competition isn’t as intense as it was last year, and now that we’re older we’re more experienced and have got the right mindset,” she said. “I want to win. I’ve been every year, so I want to get it at least once before I graduate, for sure.”