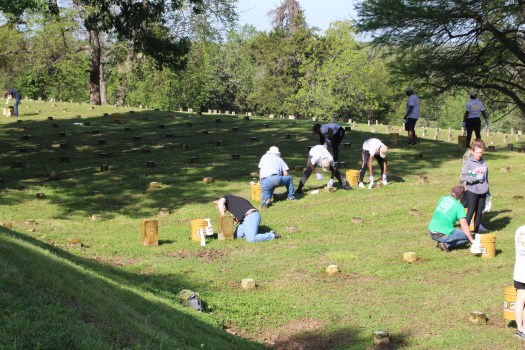 Volunteers tackle a group of headstones and markers in one area of the National Cemetery at the Vicksburg National Military Park. (Photo by John Surratt) 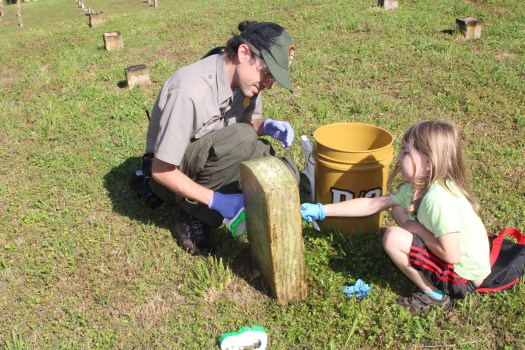 Brendan Wilson, chief of interpretation, education and partnerships at the Vicksburg National Military Park, and his son Ciaran work together to clean a marker. (Photo by John Surratt) 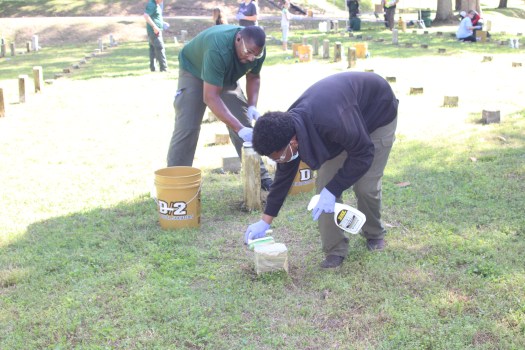 Milton Pate Jr. of Clinton, left, and son Myron Desean scrub algae from markers. Myron was one of 10 Scouts from Boy Scout Troop 88 in Clinton who came to clean the markers. (Photo by John Surratt) 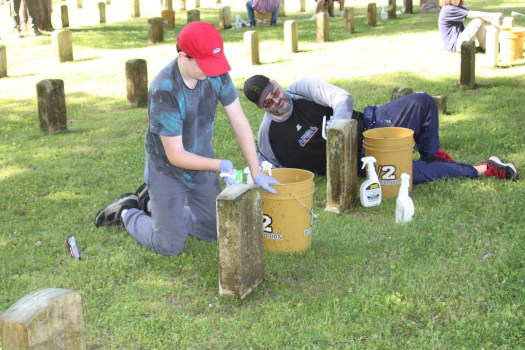 Joe Early, right, and son Quinn came from Houston, Texas, to participate in the headstone cleaning. (Photo by John Surratt) 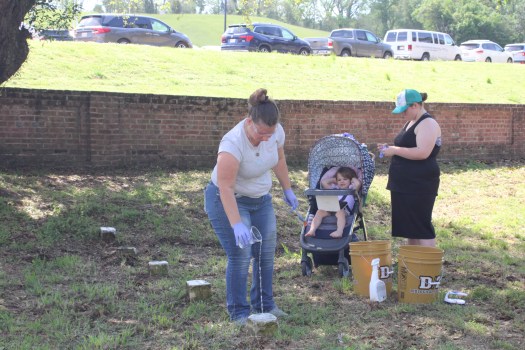 Brandy Lilly pours cleaner on a marker while her daughters Delilah and Abygail look on. The Lillys came from Brandon to help with cleaning headstones and markers in the National Cemetery. (Photo by John Surratt) 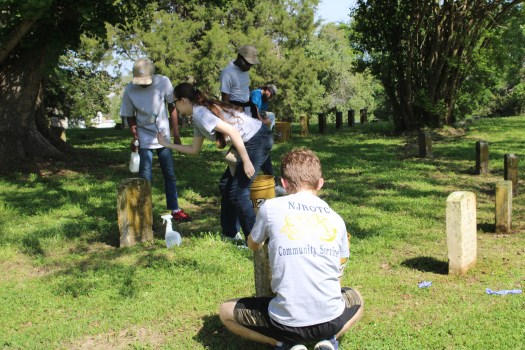 Members of the Warren Central High School NJROTC work on a section of headstones. The cadets, featured in the video included in this article, participated in the headstone cleaning as a community service project. (Photo by John Surratt)

The markers in the National Cemetery at the Vicksburg National Military Park have a new look, thanks to the efforts of about 300 volunteers who descended on the cemetery Saturday to clean the headstones and markers identifying dead heroes.

“The National Cemetery has roughly 18,000 headstones; 17,000 of them are Union war dead and we’re going to try and clean all of them today,” Brendan Wilson, chief of interpretation, education and partnerships at the park, said Saturday.

He said the volunteers working on the headstones came not from just the local area, “but from all over the country. We’re very honored to have all these volunteers here today to help with work. It’s a big event.”

The goal, Wilson said, was to have the markers “looking better than they have in a long time” by Memorial Day when flags are distributed to each marker.

Bess Averett, executive director of Friends of the Vicksburg National Park and Campaign, which sponsored the event, said the project was funded by a donation in honor of Friends’ founding board member John Nau.

“It was made specifically in his honor to do this project to help support all the supplies and publicity,” Averett said. “John has a long history with our organization for preservation projects in the park.”

The cleaner for the work was provided by D/2 Biological Solutions, which manufactures a cleaner for cleaning headstones and buildings to remove biological growth.

“We’re helping sponsor this cleaning event with the National Park Service and the idea was to get as many volunteers as we can and try to clean every headstone,” said Rusty Brenner with D/2. He said the cleaner attacks the biological growth by getting into the stone and removing the growth.

“We’ll clean them today and they’ll be different but over the next couple of months they’ll get cleaner and cleaner,” he said.

Buckets, brushes and rubber gloves were in abundance as the volunteers scattered across the cemetery; some in groups and some by themselves. Some came to get in community service hours while others came to the cemetery because they thought it was something worth checking out.

“I saw this on the website ‘Volunteer.Gov’ and thought it would be something pretty good,” said Joe Early, who with his son Quinn and daughter Alice came from Houston, Texas, to help out.

Becky Hinton of Utica said it was her grandson John Hinton’s idea to go to the park.

“There’s a lot of trash around here; we’ve got to clean it up,” John said.

Members of Warren Central High School’s Naval Junior ROTC program and 10 scouts from Troop 88 in Clinton were using the project to get community service hours.

“One of the things Scouting is about is service to others so that’s why we’re helping others,” Scoutmaster Chuck Weiss said. “We thought this would be a real good project; it’s helping the community.”

Not far from the Warren Central NJROTC, Brandy Lilly, her daughter Delilah, mother Becky and daughter Abygail, who supervised from a stroller, were cleaning a row of markers in the northern end of the cemetery.

Brandy said the discovery of the park project came by accident.

“We were online trying to see what we needed to do to get her registered, and we saw the headstone cleaning under events,” Brandy said. “I told her this was something we can do for the weekend.”