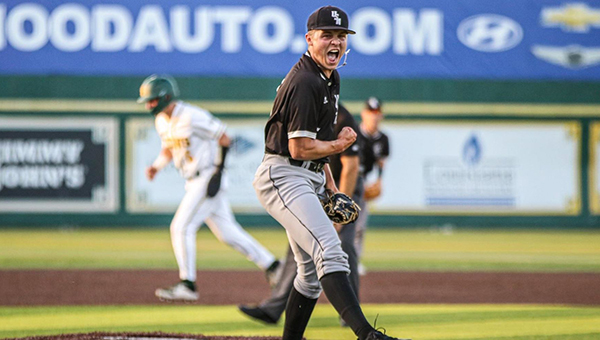 Southern Miss pitcher Matthew Adams celebrates after getting an out Tuesday against Southeastern Louisiana. Southern Miss won 9-4 to set a school record with its 15th consecutive win. (Southern Miss Athletics)

PEARL — Ole Miss did not beat Mississippi State when it really counted, but did at least get a consolation prize.

Mississippi State (24-18) took two out of three in Oxford over the weekend to win the Southeastern Conference series from the Rebels (23-17). Tuesday’s game was Ole Miss’ first in the annual Governor’s Cup matchup — which does not count in the SEC standings — since 2015.

Jacob Gonzalez also went 2-for-4 with one RBI and two runs scored for Ole Miss.

Elko drove in two runs with a double in the fifth inning to give the Rebels lead, and then scored on a single by Kevin Graham to make it 5-2.

Ole Miss’ pitchers took it from there. After allowing 17 runs in the last two games of the weekend series against the Bulldogs, they didn’t allow any after the first inning of Tuesday’s game.

McDaniel walked five batters but only allowed two hits and struck out four. Mason Nichols followed with three innings of scoreless relief and Brandon Johnson worked around a hit a hit and a walk in the ninth to earn his fourth save of the season.

Mississippi State pitcher Cam Tullar had eight strikeouts in 3 2/3 innings out of the bullpen.

Mississippi State will play at Missouri in a three-game SEC series beginning Friday at 6 p.m.

Ole Miss will travel to face SEC West leader Arkansas. Friday’s matchup will be streamed via SEC Network plus, while Saturday and Sunday’s contests will air on ESPN2 and ESPN, respectively.

The win was the 15th in a row for Southern Miss, which set a school record. Head coach Scott Berry also tied Hill Denson for the most victories in school history.

Christopher Sargent and Danny Lynch both homered for Southern Miss, which also hit five doubles.
Dustin Dickerson doubled in two runs in the second inning, Rodrigo Montenegro had another RBI double in the third, and the Golden Eagles scored three runs in each inning to take a 6-0 lead.

Montenegro finished 3-for-5 with two doubles, one RBI and one run scored.

Matthew Adams, the first of five Southern Miss pitchers, worked the first 3 2/3 innings to earn the win. He had six strikeouts, did not walk a batter, and allowed five hits.

Landon Harper pitched the last 1 1/3 innings for his ninth save.

Southern Miss will try to extend its winning streak when it goes on the road to play UAB in a three-game Conference USA series beginning Friday at 6 p.m.