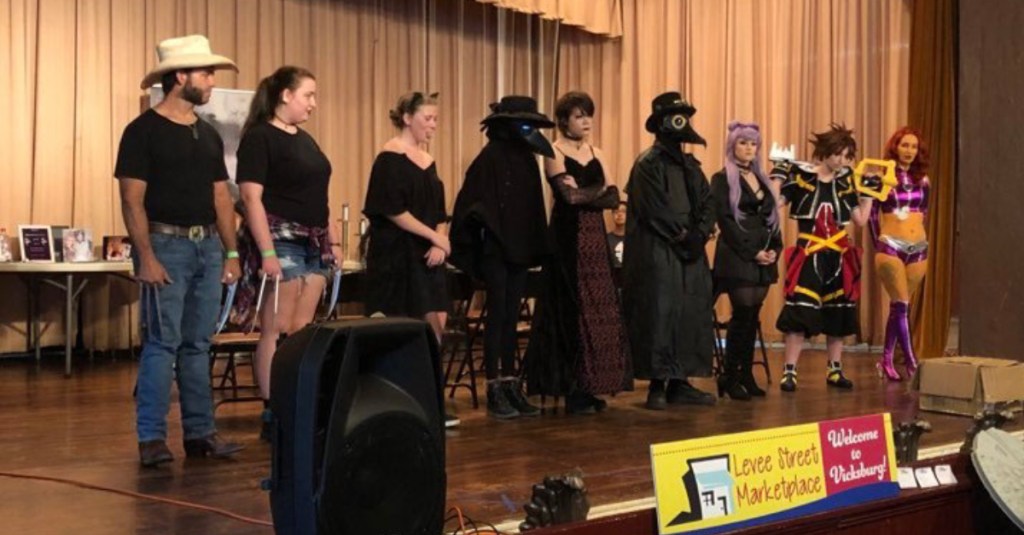 Participants in the 13 years old and older costume contest line up during the 2021 Toy Fest at the Southern Cultural Heritage Center Auditorium. (Photo Submitted)

The exhibition hall at the Vicksburg Convention Center will transform into a toy collector’s dream on Saturday when the River City Toy Fest presented by the City of Vicksburg makes a second visit to the area.

“The one we had last year was at the Southern Cultural Heritage Center; it was a small venue but we wanted to see what the market would bring,” said program organizer Neal Bumpus. “Due to the overwhelming response, we booked it into the convention center this year.”

Bumpus said about 40 vendors will be at the toy festival, which is expected to draw about 1,500 people. He said the event opens at 9 a.m. and door prizes will be given out every half-hour starting at 9:45 a.m. Admission is $10; $20 for early arrivals.

“They’re going to have toys, video games, comics sports cards — all kinds of collectible things,” he said. “We have ‘Pixel Dan’ Eardley coming in; he’s a YouTube influencer and he recently wrote a book about an 80s toys line, the Masters of the Universe, that he had published last year. He’ll have copies of the book on sale and will be autographing them.”

A truck outfitted with video games will also be on the exhibition floor, Bumpus said.

“People will be able to buy video games,” he said. “It goes back all the way to the first Nintendo up to the most modern PlayStation 5.”

Eardley will conduct a panel program on the first release of the Masters of the Universe 40 years ago in 1982. Another panel will be presented on toy photography.