Gators turn a corner during march to region title, Class 5A playoffs 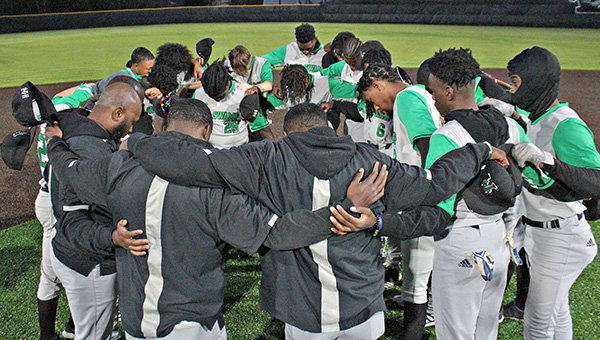 It wasn’t too long ago that Vicksburg High’s baseball program was stuck in a rut.

The once-proud program that produced several college stars and played for a state championship in the 2000s went seven seasons without a winning record in the 2010s. Games against other struggling teams that were once taken for granted as easy wins were no longer gimmes.

As the 2022 Gators circled the bases with ease and laughed it up during a 16-0 win over Callaway earlier this month, it was obvious those tough times are safely in the rearview mirror.

Vicksburg clinched the MHSAA Region 4-5A championship with two weeks left in the regular season. It posted seven shutouts in 11 region games, and did not play the full seven innings in any of them.

As they shift their focus toward the postseason, the Gators have a swagger and a confidence that has been sorely lacking — and that they hope will keep them playing into May.

Vicksburg will begin the MHSAA Class 5A playoffs Friday with a second-round series against Ridgeland. Game 1 is at Showers Field at 6 p.m. Friday, Game 2 is at Ridgeland Saturday at 1 p.m., and if Game 3 is needed it will be back at VHS Monday at 6 p.m.

“I started here four years ago, and I think we would have won (the region title) two years ago if not for COVID. But for this being year 2 1/2, because of COVID and everything else, it feels pretty good,” Vicksburg coach Antonio Calvin said. “You measure a turnaround in three-year increments. If we’re going by actual numbers we’re a year off. But if we go by everything we’ve had to deal with, we’re a half a year ahead.”

Calvin came to his alma mater in 2018 after engineering a turnaround at Greenville High School, which was struggling in many of the same ways Vicksburg was during the 2010s.

Vicksburg went 8-15 in his first year, and was off to a promising 4-2 start in 2020 when the COVID-19 pandemic ended the season in mid-March. Several experienced and talented seniors were lost from that team, so 2021 was another rebuilding year.

Finally, in 2022, everything seems to be coming together.

The Gators (18-7) are guaranteed of their first winning record since 2012, and won their first region championship since 2009. The region title brings with it a first-round bye in the Class 5A playoffs, so they had a chance to sit back, rest and scout Ridgeland during its first-round sweep of West Point last weekend.

“This year it’s a different feel for us,” Calvin said. “We’ve had some things we’ve had to fight through, but for us to be able to sit down for a week and play and be able to scout it feels a little bit different for us.”

The most telling difference between then and now is the way the Gators handled their business against region opponents.

Region 4-5A, which contains Vicksburg and four struggling Jackson Public Schools programs, is far from elite. Callaway had eight players in the lineup for its loss at Showers Field earlier this month. Provine forfeited a game against Vicksburg earlier this season after losing a doubleheader by a combined score of 30-0 two days earlier.

Still, the Gators have done what good teams should do against those kinds of opponents. All 11 region games — they did not reschedule a late-season rainout against Forest Hill — resulted in run-rule victories. They outscored their region foes 142-17, and most of the runs they allowed came in an early-season 21-11 win over Jim Hill.

The success has bred plenty of confidence. Rather than going into those games hoping to win, the Gators now expect to win — and win big.

“We come out with the same mindset every game,” senior outfielder Rashad McCroy said. “We’re trying to get it over with in three innings.”

Calvin credited the turnaround to a culture change within the program that took a few years to fully grab hold. Hard work and discipline are expected now, from both players and coaches.

“We started off with Coach Calvin as freshmen and he got us right,” McCroy said. “We’re actually working. We used to play a lot, but we’re getting serious now. We see what we can do.”

Calvin said he’s tried to sweat and work right alongside his players to lead by example, and it’s now paying off.

This year’s small senior class — McCroy, infielder Terrance Johnson and outfielder William Evans are the only senior starters — bodes well for the future. They also hold a special place in Calvin’s heart, he said, as the first senior class he’s had for four full years.

“We’re excited that we only have three seniors. We’re excited about the fact that the guys we started with are now graduating seniors, so it feels good to finally make those guys winners,” Calvin said.

No matter what happens in the postseason, it’s clear that this spring has marked a major turning point in the history of Vicksburg’s baseball program, Calvin added.

“We’re training these young boys not just to be baseball players, but to be men,” Calvin said. “You have to be able to stand underneath every form of pressure and still perservere and come out shining like a diamond. We apply that same kind of pressure to these guys. Finally, we are starting to see the fruits of that. And this is just the beginning of it.”