LOOKING BACK: The changing faces of 1111 South Street 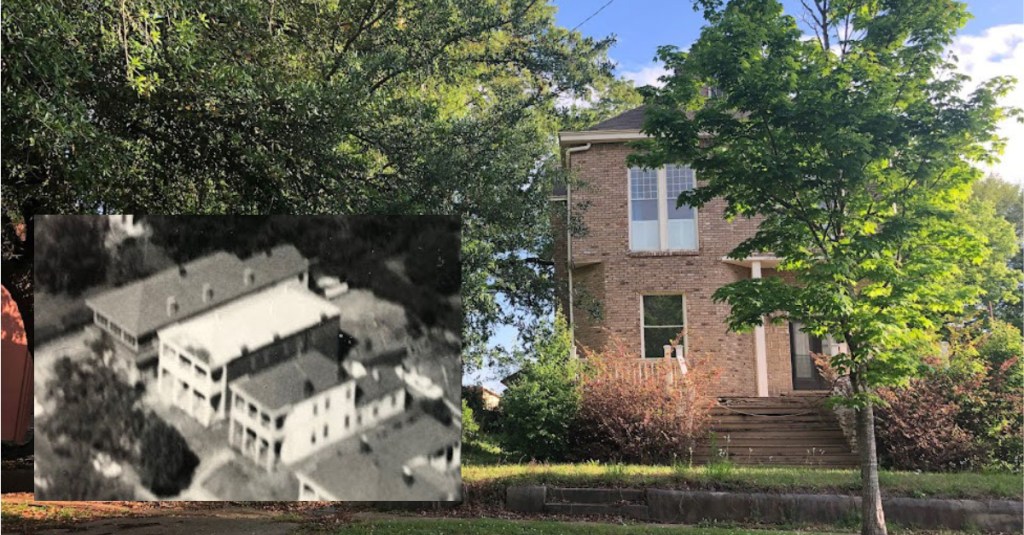 There used to be three two-story houses on the north side of this stretch of the 1100 block of South Street between the Beck House on the corner of Adams and Belle Fleur on the corner of Locust Street.

The house that currently sits in the block is what remains of the McDermott House that was moved from the other side of South Street, next to the parking lot for First Presbyterian Church. The house that was originally built on this first lot was most probably built about 1870 by Martin Marshall and was a two-story brick and flush board residence with a full-façade, two-tiered porch.

Marshall was born in Warren County and was the oldest son of Thomas A. Marshall. According to Marshall’s obituary in the Daily Commercial Herald on Sept. 19, 1895, “he was a direct descendant of the distinguished Chief Justice John Marshall, and inherited the genius of a long line of eminent ancestry. Mr. Marshall was a graduate of the Virginia Military Institute, studied law under the renowned John B. Minor, and graduated from the law school of the University of Virginia. It was from the former institution that the company of boy soldiers went out, and fought with such fury and gallantry at New Market, as to attract the admiration of the whole country.  In this engagement, young Marshall, then a boy of fifteen years, was wounded.”

He married Ellen Bush and the couple had five children. In 1876, he represented Warren County in the state legislature and in 1884 was elected to the state senate. He was a member of the Knights of Pythias, Legion of Honor, and Camp 32 of the Confederate Veterans and was commander of the camp.

An article in the Herald reported that in November 1873 that his home on South Street was “burglariously entered” and that the culprit was caught. The Herald also reported in September 1877, that this house had caught fire, the cause of the flame being a curious one.

“The boys about town fly kites every night with lanterns attached to the tails, and yesterday evening, about half-past seven o’clock, one fell on and set fire to the roof of Mr. Martin Marshall’s residence, on South Street. An alarm was struck and all the engines called out, but the fire was extinguished with buckets. The flying of illuminated kites must be prohibited.”

The Marshalls had moved from this house by 1886 and it was occupied by Mrs. Duff Green who was joined some years later (at least 1895) by Mrs. William A. Lake, both were widows. By 1906, the Aicklens, James and Stella, Hugh and Mrs. Mary E. Aicklen, lived in the house but were out by 1907.

The house was advertised for rent, with the Vicksburg Herald advertisement stating that it was a boarding house with newly furnished rooms and offered with or without board, “house newly remodeled, just opened up; rates reasonable; also rooms for light housekeeping.”

It remained a boarding house until about 1911 when it appears to have become a single-family residence again, this time for Robert and Emma Wailes. In 1918, it was the home of Mr. and Mrs. A.W. Conti, whose 3-year-old daughter died on Feb. 1, 1918, and the funeral was held from the house.

Mrs. Conti’s 18-year-old sister, Annie Palmer, lived in the house as well and when she died in March 1922, her funeral was also held in the house.

Joseph and Mary Palermo also lived in the house in the 1920s and into the 1960s. The house was eventually demolished in the 1990s.

ON THE SHELF: Mystery and Intrigue in convenient Large Print

GUEST COLUMN: Take charge of Your future by saving now

GUIZERIX: Read to your child and support your local…