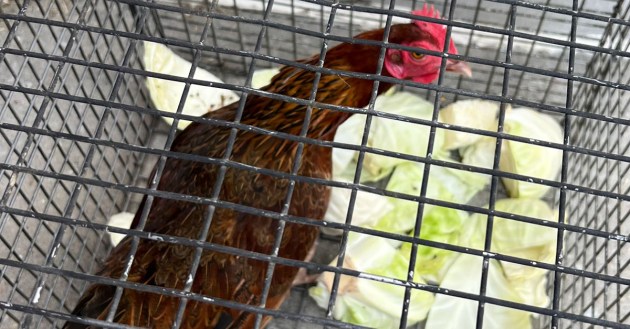 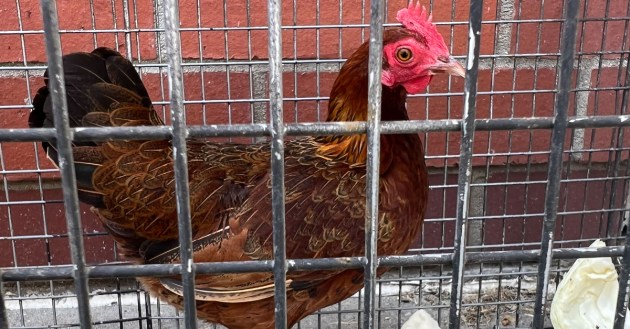 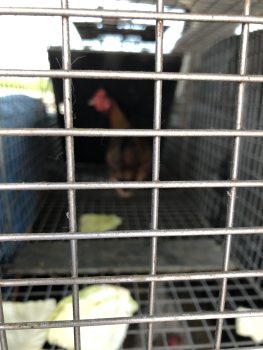 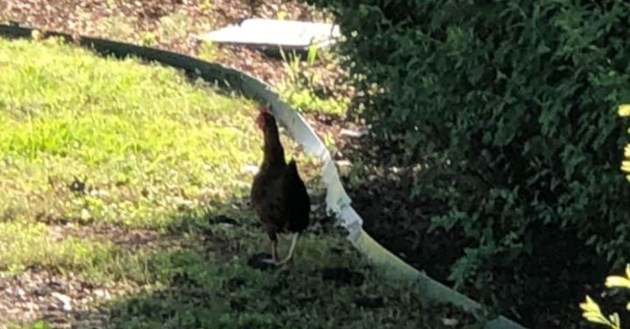 This small rooster was spotted near Levee Street Marketplace on Monday and Tuesday. (Photo courtesy of Mary Landers)

Why did the rooster cross the road? That’s what people on the north end of Levee Street would like to know.

Mary Landers has seen just about everything down at the river, but the owner of the Levee Street Marketplace said she has never seen a rooster – a live one, anyway. That was until Monday morning when she was out walking her dog.

“I walk Spartan every single morning and every day at 2 p.m., and he (the rooster) was there again at 2 p.m.,” Landers said.

On her Tuesday morning walk with Spartan, Landers said, she thought the rooster was gone because she did not see him. But he wasn’t.

During the afternoon dog walk, she spied him in the bushes, she said.

The fowl friend was still hanging out at the waterfront Wednesday morning. Landers posted her rooster sighting on Facebook, but no one claimed him.

Landers said she did, however, have a couple of people call who were interested in rescuing the bird. One woman even came out Wednesday afternoon and tried to get him, but failed to capture the cockerel.

“She had been unsuccessful because she was scared the rooster was going to run into the road,” Landers said.

It appeared the rooster wasn’t ready to leave and was possibly acclimating to his new digs. Landers said she had heard him crow.

In addition to a rooster’s crow signaling the break of dawn, they are also known to crow when announcing a territorial boundary.

Nevertheless, in this situation, a rooster living so close to the river was not in his best interest.

Therefore, a couple more folks came down late Wednesday afternoon to try and capture the cockerel before there was any “fowl” play.

But, like the woman who had tried to wrangle the rooster earlier in the day, the women’s attempts were thwarted. He was just too fast.

So the plan was to return the next morning with a trap.

And sure enough, with a pretty hen and a piece of cabbage for bait, on Thursday morning the rooster walked right on into Chrissy Moon White’s cage.

Landers said the rooster is much better off living with White as opposed to hanging out by the waterfront.

“She (White) is going to add him to her farm. She has lots of chickens,” Landers said. 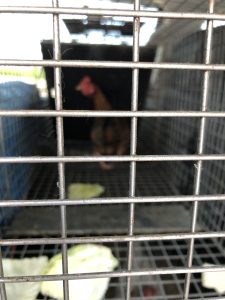 The Levee Street Rooster has a new home after being successfully trapped Thursday morning. (Photo submitted)

UPDATE: Originally thought to be a rooster, the fowl in question was later discovered to be a bantam hen, according to her rescuer. The Post hopes its readers won’t be too “eggs-asperated” by this error.