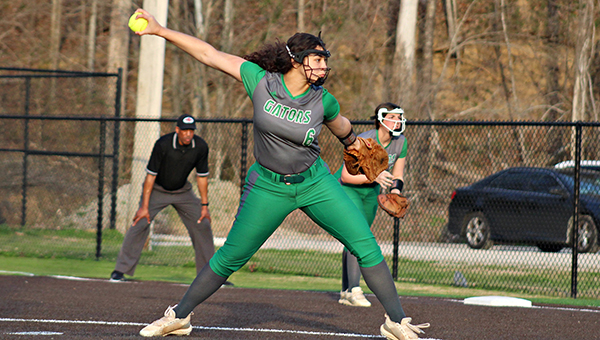 Vicksburg High softball pitcher Lexi Kistler delivers during a game earlier this season. The Missy Gators will face Ridgeland in the second round of the MHSAA Class 5A playoffs this weekend. (Ernest Bowker/The Vicksburg Post)

Vicksburg High’s softball season has been an unusual ride, to say the least.

The Missy Gators started the season by losing 10 of their first 11 games, then won seven of the next eight. They clinched the Region 4-5A championship without setting foot on the field, when Jim Hill forfeited a game to them.

Finally, in the run-up to the playoffs, they’ve come to a dead stop. Rainouts and other cancellations have conspired to let the Missy Gators play only one game in the past three weeks. Their biggest challenge Friday might not be their opponent, Ridgeland, but simply regaining the momentum and speed that was scrubbed off by the long layoff.

“We’ve done some intersquad scrimmages. We’re going to really go into game mode (Wednesday) and scrimmage for an hour and a half or so. But it’s tough because a lot of teams have played a lot of ballgames in the last three weeks — a lot more than us,” Vicksburg coach Brian Ellis said before Wednesday’s practice. “You’re this late in the season, it’s up to the girls to showcase what they can do and go out and play. It’s a big mental thing.”

Vicksburg (9-13) will host Ridgeland (17-8) in a second-round series in the MHSAA Class 5A playoffs beginning Friday at 6 p.m. at VHS’ Softball Swamp.

Game 2 will be Saturday at 1 p.m. at Ridgeland, and if a deciding Game 3 is necessary it will be Monday at 6 p.m. at Vicksburg.

Vicksburg and Ridgeland have not played each other this season, but there is some familiarity between the teams.

“It’s kind of tough seeing Makyia and Kamyia on the other side,” Ellis said with a laugh.

Any friendly reunion will quickly give way to fierce competition, however, as the Missy Gators and Lady Titans try to punch their ticket to the Class 5A quarterfinals.

Even with their up-and-down season, Ellis said there’s no reason his team cannot pull things together and make a deep run in the bracket.

A number of Vicksburg’s early-season losses came against solid Class 5A and 6A teams, and coincided with a prolonged hitting slump. The hot streak that followed, Ellis said, offered a glimpse of the team’s potential.

“We were down. We weren’t real happy that we lost 10 in a row,” Ellis said. “Then when we got on a streak it wasn’t that we turned it up. Things just started falling in place and we let the game roll where it was rolling and put on a pretty good streak. We beat teams that had beaten us early in the year.”

The goal now is to beat a couple more teams and keep the season going well into May. The hard part, Ellis added, is reminding everyone that it won’t take much to make it happen.

“They know anything can happen in the playoffs — obviously, from what happened last year,” Ellis said, referencing a controversial series loss to New Hope in the second round in 2021. “We’ve been through some rollercoaster rides in the playoffs where we’ve forced some series to three games. It’s just getting in there and playing.

“I always want to make them realize that any year you can win a state championship,” Ellis added. “That’s the way this game is. You’ve just got to put that chip on your shoulder and go.”