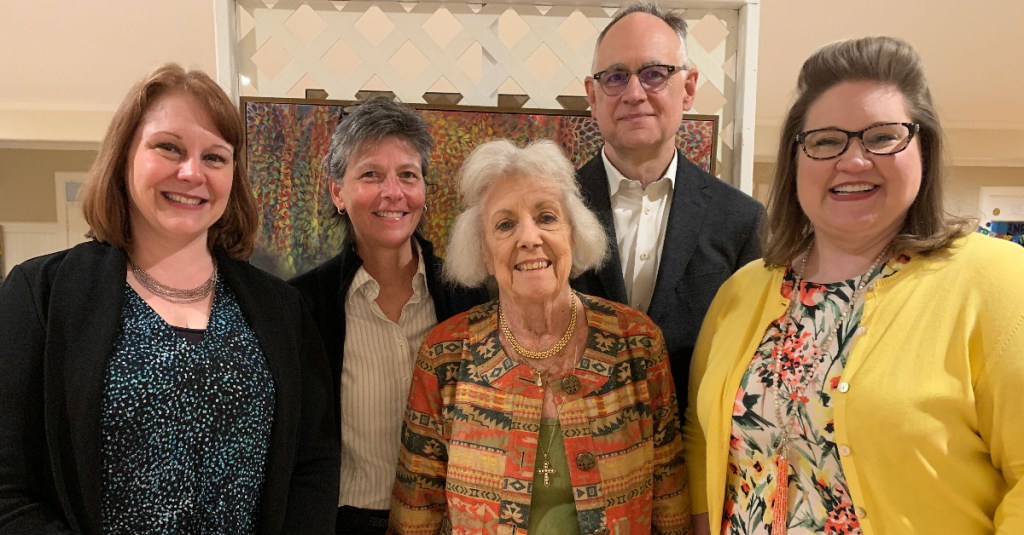 The Mississippi Symphony Orchestra has a new president and executive director, Jenny Mann. A tea was held in her honor at the Church of the Holy Trinity on April 20. Pictured are, from left, Mann, MSO principal trumpet player Darcy Bishop, MSO board member Dorothy Brasfield, MSO Maestro Crafton Beack and MSO board member Debbie Felt. (Photo by Terri Cowart Frazier | The Vicksburg Post)

Vicksburg is a community with many avenues to celebrate the arts.

There are live theater and choral performances, artists and art galleries, dancers, craftsmen and musicians. The River City also has a relationship with the Mississippi Symphony Orchestra, thanks to three local women who serve on the MSO Board.

On April 20, those women, Dorothy Brasfield, Carol McMillin and Debbie Felt, hosted an afternoon tea at the Church of the Holy Trinity in efforts to continue the relationship between Vicksburg and the symphony and to introduce locals to the MSO’s new president and executive director, Jenny Mann.

Mann, who most recently served as the executive director of the Tuscaloosa Symphony where she was the principal bassoonist since 2006, has taken the position following the retirement of the former MSO Executive Director Michael Beattie.

“We wanted to promote the symphony any way we can and introduce her (Mann) to the citizens of Vicksburg,” McMillin said.

The MSO performs in Vicksburg “at least twice a year,” McMillin said, including a candlelight concert, as part of the Four Seasons of the Arts programming, which is held at Holy Trinity in January, and an outdoor concert at the Vicksburg National Military Park to celebrate Memorial Day.

“The concert in the military park is very popular,” McMillin said.

Also in the past, McMillin said, Vicksburg has hosted “A Night at the Symphony,” which entails a reception along with locals loading up on a bus and traveling to Thalia Mara Hall to attend a performance in Jackson.

An additional connection Vicksburg has to the MSO is its principal trumpet player, Darcy Bishop.

Bishop is the conductor for the Vicksburg Orchestral Society.

“There are all kinds of ties between this community and the Mississippi Symphony,” McMillin said, and hopes are to continue and expand the relationship.