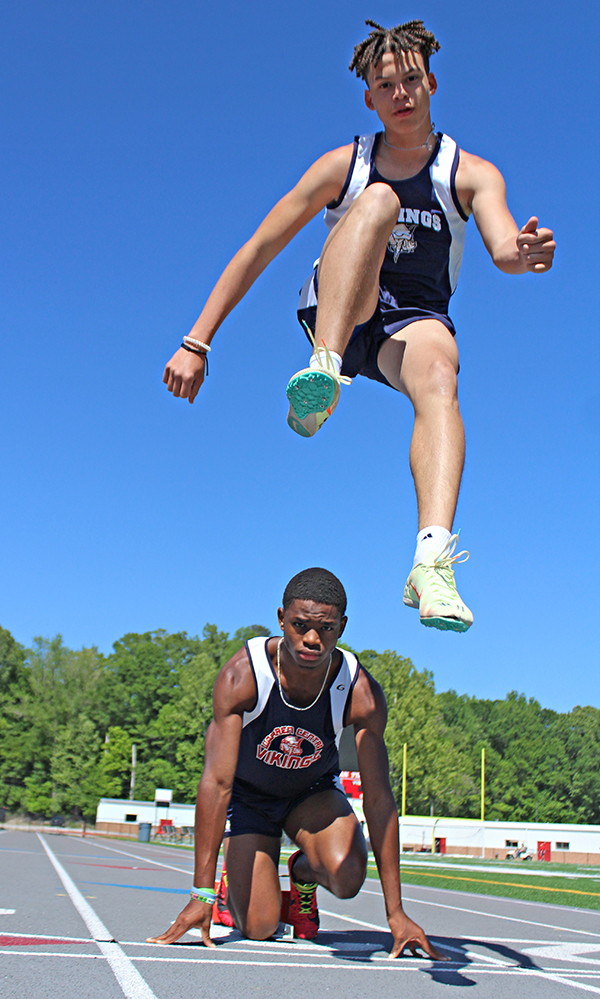 A month ago, the thought of competing for a state championship wasn’t really on Jonathan Henderson’s mind.

The Warren Central sophomore was winding down his first varsity track season, showing a bit of potential, but still far from the kinds of marks that could be considered elite in his best event the high jump.

Then, in the first round of the postseason, he made a literal leap to the next level. Then another. And another.

In the span of three weeks Henderson’s personal best in the high jump improved by a foot. And, when the event is contested Friday at the MHSAA Class 6A state meet in Pearl, he’ll be right in the thick of the competition for a medal — perhaps even a gold one.

“I prayed before every meet and I jumped. God got me up there. It’s been a span of two weeks. It blew my mind,” Henderson said. “I went from not even placing at some of these meets to getting first and second in South State, regionals and division. I wasn’t expecting it.”

Henderson’s best high jump height in the regular season was 5 feet, 4 inches. He cleared 5-10 to win the Division 5-6A championship, and then finished second at both the Region 3-6A and South State meets by clearing 6-2.
He went over the bar at 6 feet, 4 inches in practice earlier this week. It’s been a sudden and remarkable surge that’s caught even Henderson himself off guard.

“God’s grace that I got here,” Henderson said. “I didn’t break out until about three weeks ago. Then in district I jumped 5-10. I had never jumped over 5-4 before that. It was a blessing to get here.”
Even with his sudden improvement, Henderson might need another blessing to beat a talented field at the state meet.

In all, seven of the eight jumpers in the state meet cleared at least 6 feet last week. The competition will be stiff, but Henderson said he’s not intimidated by it.

“What’s the point of getting scared? They jump what they jump, and I’m going to jump what I jump. It is what it is,” Henderson said. “I’ve got to go in and do my best. It’s on me.”

Henderson is one of two Warren Central athletes who will compete in the Class 6A state meet Friday at Pearl High School. Senior sprinter Ashton Murphy will go in the boys’ 100 meters.

Murphy has not won yet in this postseason — he was third at the division and region meets, and fourth at South State; the top four in each event advance to the next round — but hasn’t been far off, either.

He tied for third place at the region meet with a time of 10.88 seconds, a hundredth of a second behind winner Jeffrey Gathright of Meridian and tied with Northwest Rankin’s Jalen Nelson in a dead heat.

He slipped a bit last week, to 11.18 seconds, but was still only two-tenths of a second behind Gathright and a tenth behind Nelson. Clinton’s Omari Hampton won the North State title with a time of 11.10 seconds.

With the state meet field bunched so closely together, Murphy said he’s trying to fine-tune the one or two little things that could mean the difference between first and eighth place.

“As of right now it’s good enough to place,” he said of his times so far. “I’ve had trouble with my start all year and I’ve been working on it. I feel like it’s going to pay off.”

The last race of Murphy’s high school career is also a chance for a bit of redemption. A bad race in 2021 knocked him out in the North State meet. He finished fifth in the 200 meters at this year’s division meet, a hundredth of a second away from advancing.

The close line between victory and frustration has been hammered home, he said.

“That’s one thing about sprints. If one little thing goes wrong then it’s going to lead to another — and one thing led to another (in 2021) and I didn’t qualify,” Murphy said. “But it is what it is. I qualified in the 100 this year and I’m blessed.”

Now he’ll try to win it. Like Henderson, he’ll have to conquer a stacked field in his event. Also like Henderson, he’s not backing down from the challenge. And, if he wins, Murphy said he also won’t be shy about showing some emotion on the podium.