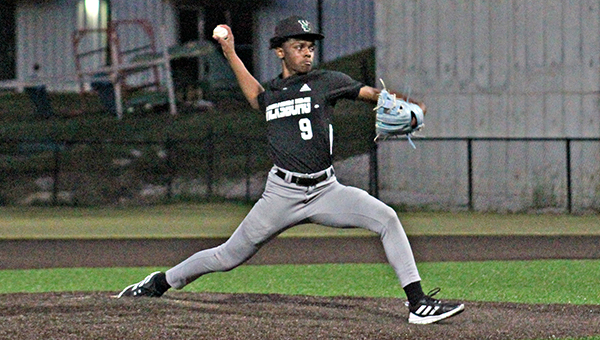 Vicksburg High pitcher Michael Johnson throws to the plate in the seventh inning of an MHSAA Class 5A baseball playoff game against Ridgeland on Friday. Ridgeland beat the Gators 8-0 to take a 1-0 series lead. (Ernest Bowker/The Vicksburg Post)

Ridgeland never really gashed Vicksburg in Game 1 of their MHSAA Class 5A baseball playoff series. It was more of a slow bleed that eventually left the Gators dry.

Ridgeland (18-10) scored three runs in the fourth inning and three more in the seventh to blow open an otherwise close game. Vicksburg pitcher Chris Green, a sophomore, had four strikeouts and only walked two batters in six innings.

“Chris Green pitched a hell of a game tonight,” Vicksburg coach Antonio Calvin said. “I know the score didn’t necessarily look like it, but as you can see he gave up one in the first, put up some zeroes, gave up three and then put up another zero and gave up one more. He bowed his neck and we knew that he would do that. He’s built for it.

Vicksburg (18-8) was also plagued by a series of hard-hit balls that were either run down in the outfield or played cleanly for outs.

Braylon Green reached base three times for the Gators, on two singles and a walk. Tyler Carter and Conner Harrigill each hit a double.

Ridgeland beat Vicksburg 16-1 when they played each other in the regular season on April 9. The hard-hit balls and more competitive flow of Friday’s contest was one positive takeaway, Calvin said, heading into a do-or-die situation on Saturday.

The Gators must win on the road at Ridgeland in Game 2 of the best-of-three series to force a decisive Game 3 back at Showers Field on Monday night. Lose, and the program’s best season in a decade will end with an early playoff exit.

Saturday’s game will begin at 1 p.m.

“We know this team. This team used to be in our district. That boy that was on the hill tonight was their ace. He did a valiant job, but we hit some balls really, really hard and just hit them at people,” Calvin said. “They hit some balls really, really hard and hit them where we weren’t standing. And unfortunately, that’s baseball. It happens. But I’m extremely proud of our players. We played a hell of a game and we’ll be ready tomorrow.”