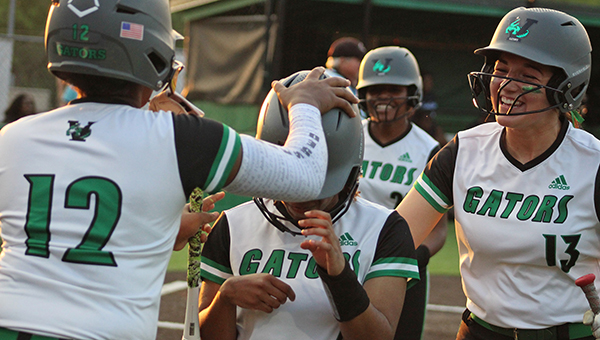 Rust? What rust? The Vicksburg Missy Gators hit the gas and left Ridgeland in the dust.

Vijae Flaggs hit an inside-the-park grand slam, and Kellisia Walker had three of Vicksburg’s 15 hits as it pummeled Ridgeland 23-4 in Game 1 of an MHSAA Class 5A softball playoff series on Friday.

The Missy Gators (10-13) were playing just their second game in three weeks, but showed no ill effects from the layoff.

They scored eight runs in the bottom of the first and batted around in three of the four innings in which they batted.

Ridgeland’s pitchers walked nine batters and threw 12 wild pitches. Its fielders committed six errors. The mistakes only helped the Missy Gators pad the score a bit, however, and did not decide the outcome. The Missy Gators settled that on their own.

Walker went 3-for-4 with a three singles, two RBIs and three runs scored. Lili Kistler and Charli Van Norman each hit an RBI double, and Flaggs provided the biggest highlight with her bases-loaded drive to the gap in left center field.

The ball hit off the wall and rolled around in the outfield long enough for the speedy Flaggs to circle the bases and score without a play at the plate for a rare inside-the-park grand slam. The hit put Vicksburg ahead 17-3 in the third inning.

“I was just thinking, ‘Go home! Go home!’ That was good. The way I was hitting today, I wasn’t really hitting anything, so when I got that hit it felt good,” said Flaggs, who was 1-for-3 in the game with the home run, a walk, four RBIs and two runs scored.

The lopsided victory in Game 1 put the Missy Gators in an enviable position, where their biggest challenge might be avoiding overconfidence in Game 2.

The teams will play again Saturday at 1 p.m. at Ridgeland, with a trip to the third round on the line for Vicksburg. If Ridgeland rallies to win, they’ll play again Monday at 6 p.m. at Vicksburg’s Softball Swamp.

Another big win won’t just put an emphatic stamp on this series, Ellis said, but will generate some momentum going into the next one.