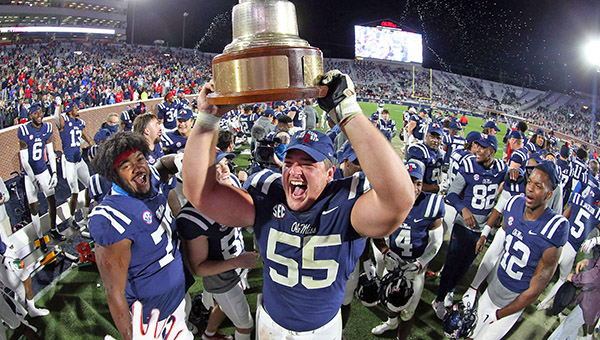 Ben Brown spent a lot of time Saturday afternoon watching the final rounds of the 2022 NFL Draft zip along and waiting to see his name splashed across the TV screen.

He never got that fleeting moment of fame, but he still wound up with the same opportunity as the 262 players who did get picked.

Brown, a former Ole Miss and St. Aloysius offensive lineman, was not selected in the draft but did sign a free agent contract with the AFC champion Cincinnati Bengals immediately afterward.

Brown said a number of teams contacted him, but the Bengals offered the best path to making the roster.

“It was a long and stressful day, kind of having our eyes glued to the television the entire time,” Brown said. “But I’d been speaking to the Bengals for a while and they didn’t draft an interior guy. We knew it would be a good opportunity for me, especially because they didn’t have a lot of offensive guards and interior linemen on their roster currently.”

Brown, a Vicksburg native, started 40 consecutive games at center and right guard over his first 3 1/2 seasons with Ole Miss. The streak ended when he tore a bicep tendon in his left arm in the final minutes of a win over Tennessee in mid-October.

The injury might have pushed Brown down the draft board, but he was still able to attend the NFL Scouting Combine in March and figured he would get some attention as an undrafted free agent even if he wasn’t actually picked.

The draft concluded on Saturday, and the Bengals were among the teams that started calling during the last two rounds. When Brown weighed all of his options, he said finding a team that would give him a chance to show what he could do in offseason workouts and training camp was the most important factor.

The Bengals rose to the top of that list. Their offensive line depth chart, Brown said, has a need for a player like him who can play multiple positions on the interior of the line.

“We were hearing from a lot of other teams, and a lot of teams had great offers,” Brown said. “At the end of the day, we felt most comfortable with our situation with the Bengals. That was the best opportunity for me, and we’re pumped to be a Bengal.”

Brown will head to Cincinnati to begin his career in a week or so. Several weeks of meetings and workouts are ahead before training camp begins in July — as is one other event.

“We’ll have a few weeks off in the summer, I’ll get married and then go right back up there for training camp,” he said with a laugh. “It’s busy times ahead, but all good times.”

Making the Bengals’ roster will not be easy. Each team brings about 90 players to camp and only 53 make the final roster. Another 10 or so will be signed to the practice squad. Because of those odds, Brown was hesitant to call himself an NFL player just yet.

“I’ve got to earn it first. The draft is really a small step toward your career in the NFL. A lot of guys won’t make it,” he said. “To be able to be a part of the process and to actually sign an undrafted free agent deal with an NFL team is truly amazing. God’s good, and I’m blessed to be able to get a call from the Cincinnati Bengals and be able to join their football team.”

Brown added that he’s clear on what it will take to be among the fortunate few in uniform for the season opener in September. It’s many of the same things that led him from a high school standout at St. Aloysius to becoming an entrenched starter in the Southeastern Conference, and now to the NFL.

“I need to establish value with my organization. With the Bengals I need to prove my worth as a player, and that goes beyond my skills as a football player,” Brown said. “I need to show them I’m intelligent, that I’m reliable and durable, that I can be used on the offensive line wherever I am needed. However they need to use me and whatever they need me to do, I am willing to do it at 100 percent.

“I want to prove to them that I’m going to work my tail off for you. I’m going to do everything you ask me to do, plus more. I want to help the Bengals win a Super Bowl,” he continued. “That’s the ultimate career aspiration of mine, and however that looks — whether it’s the practice squad or the active roster — I want to win a Super Bowl.”