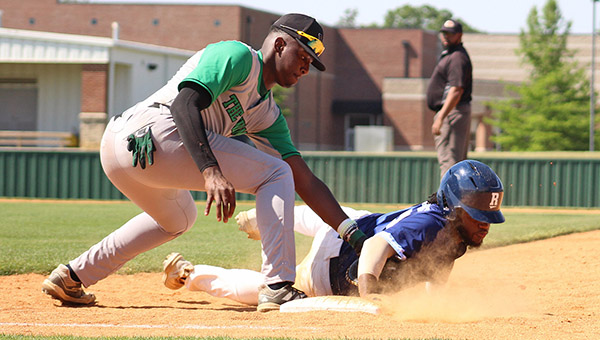 RIDGELAND — The Vicksburg Gators did everything they could to stay in Saturday’s do-or-die playoff game against Ridgeland. In the end, though, it just wasn’t their day or their weekend.

James Woody doubled and drove in three runs, and Montravious Wynn had seven strikeouts in five innings pitched as Ridgeland beat the Gators 14-4 to complete a two-game sweep of their MHSAA Class 5A baseball playoff series.

Ridgeland (19-10) advanced to face Saltillo in the Class 5A quarterfinals. Vicksburg finished its season with an 18-9 record, and an optimistic outlook for the future.

The program had its first full winning season since 2012 — excluding the 2020 COVID-shortened season — and won a region championship for the first time since 2009. Only three seniors are gone from this year’s roster, so there is also an expectation that the Gators will build instead of rebuild in 2023.

“These last two weeks, these last two games, we’re probably most proud of those guys because they dug down deep. They were able to find that extra gear and that extra thing you need to overcome adversity,” Vicksburg coach Antonio Calvin said. “For us seeing that, seeing glimpses of that means that it’s there. We’re trending in the right direction and really pushing these guys to the level they need to be.”

Ridgeland scored in all six innings on its way to a run-rule win on Saturday, but it was one inning in particular that turned the tide.

The Titans used five walks and two hit batters to score five runs without getting a hit in the bottom of the third inning. That surge turned a tight 2-1 lead into a much more comfortable 7-1 margin, and Vicksburg never recovered.

Three Vicksburg pitchers combined to walk eight batters and hit five in the game. Ridgeland finished with eight hits, a modest total for the number of runs it scored.

“We fought, fought, fought. 14-4 doesn’t necessarily show that. That third inning, those walks, those hit batters hurt bad. We delete that third inning, we’re all right. We’re still playing,” Calvin said. “That’s tough when you go into it 2-1 and come out 7-1, and it wasn’t because they hit the ball. When you do that, it is a momentum killer.”

In the third, Rashad McCroy hit a triple and scored on a double by Tyler Carter, but those hits were followed by two strikeouts.

McCroy finished 2-for-2 with two triples, one RBI and two runs scored. Carter had two RBIs.

“We left six runners on the pond. That’s something we’re going to focus on during the summer, is getting stronger,” Calvin said. “It wasn’t a bad season. Today just was not our day.”