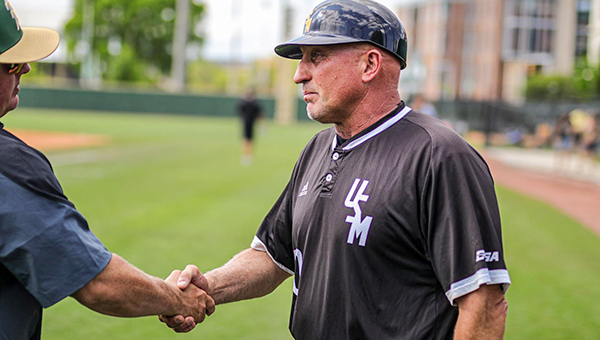 BIRMINGHAM, Ala. — Three home runs helped propel No. 4 Southern Miss to a victory over UAB, and head coach Scott Berry into the record books.

The Golden Eagles’ 9-6 victory in Sunday’s series finale was the 469th of Berry’s career, making him Southern Miss’ all-time winningest coach. Berry is in his 13th season.

“It really means everything,” Berry said. “I have been a part of some special wins at this school and have been fortunate to be the head coach here in I guess in my 13th year. I followed some really great people with Pete Taylor, Hill Denson and Corky Palmer. All of those guys laid the groundwork.”

Southern Miss (34-10 overall, 17-4 Conference USA) bounced back after dropping the first two games of the series with

“Of all those wins, 469, the most important win honestly was the one today and it wasn’t because of breaking a record, but it was because this team needed that win,” Berry said. “We had to have that win and I couldn’t be any more proud of our guys to go out there and grind that thing out and feel the sense of urgency that we had to have that win.”

After UAB took an early lead, Christopher Sargent and Danny Lynch both homered in the fourth inning to put the Golden Eagles ahead 3-1. Will McGillis added a solo shot in the seventh inning as Southern Miss scored five runs to go in front 9-3.

It was the 12th home run of the year for McGillis. Gabe Montenegro had two hits and scored two runs, and Dustin Dickerson went 3-for-5 with one RBI and one run scored for the Golden Eagles.

Caleb Floyd was 2-for-5 with a home run and two RBIs for UAB. Josh Sears hit an RBI double in the ninth inning as the Blazers scored three runs, but they never got the tying run to the plate.

Southern Miss returns to action Tuesday night at 6:30, when it finishes a five-game road swing at South Alabama.

Arkansas 4, Ole Miss 3
Michael Turner hit a two-run home run in the fifth inning to give Arkansas the lead for good, and the Razorbacks went on to beat Ole Miss (24-19, 7-14 Southeastern Conference) in the rubber match of a three-game series in Fayetteville.

Morris and Tygart each allowed one hit in their respective three-inning stints. Tygart had five strikeouts and earned his seventh save of the season.

Kemp Alderman drove in two runs with a single for Ole Miss. Justin Bench reached base four times, on two singles and two walks, and scored a run.

Ole Miss will host Missouri in another SEC series beginning next Friday at 6:30 p.m.

Day’s home run was the last of six that the teams combined for. Luke Mann and Ty Wilmsmeyer also went deep for Missouri, while Kamren James, Hunter Hines and R.J. Yeager all homered for Mississippi State.

Yeager’s two-run home run and an RBI double by Brad Cumbest helped the Bulldogs overcome a three-run deficit to tie the game at 6 in the seventh inning.

Yeager finished 3-for-5 with two RBIs, and Hines was 3-for-4 with two RBIs and two runs scored.
Mississippi State lost two of three games against Missouri, the last-place team in the SEC East division, after winning its previous two weekend series and taking the opener of this one.

The Bulldogs will not have a midweek game this week, and will play again Friday at 7 p.m. at home against Florida.