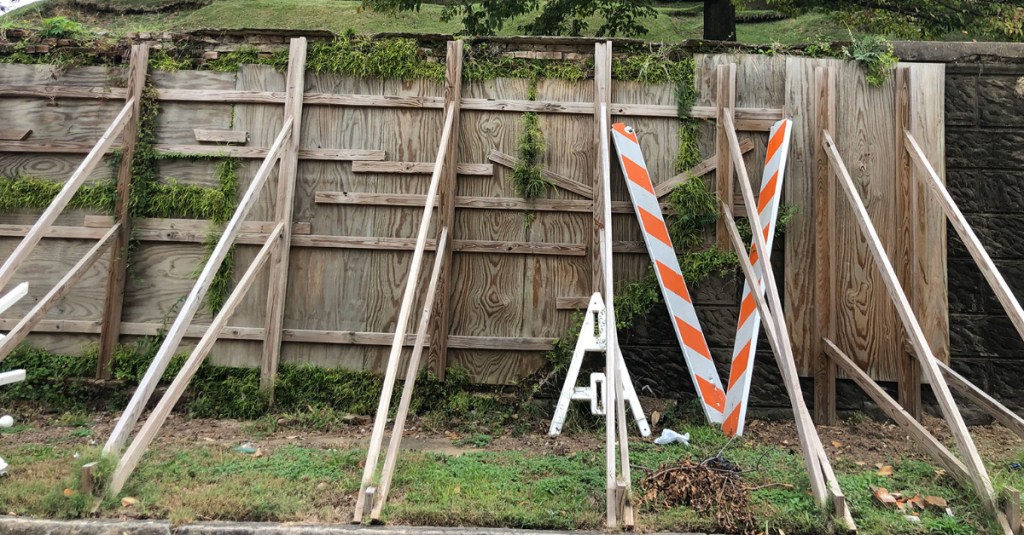 The west side of the retaining wall around the Old Court House Museum on Monroe St. in Vicksburg, collapsed in July 2019 due to water seepage and erosion issues. (Photo by Anna Guizerix | The Vicksburg Post)

Thanks in part to a grant from the Mississippi Department of Archives and History and an allocation from the state legislature, repairs to the worst portions of the Old Warren County Courthouse wall are now in sight.

After a portion of the westward-facing wall collapsed onto the sidewalk in 2019, the Warren County Board of Supervisors had allocated funding for repairs in each budget session. However, Board President Kelle Barfield said, the total cost to restore all four walls surrounding the historic courthouse was estimated at $2.2 million. Two years later, inflation has pushed that estimated cost even higher.

Repairs to the portions of the wall in the worst states of disrepair — the west and north walls — first became reality in January of this year when MDAH awarded the county a $100,000 grant to be used for the courthouse wall. Then, in April, the state legislature closed out its session with the announcement of $5.2 million allocated to entities in Vicksburg and Warren County. The $650,000 allocated to the county for courthouse wall repairs was a “shot in the arm,” County Engineer Keith O’Keefe said.

“We’re going to be able to repair a much larger section of that wall, if not complete all of it.”

In addition to state funds totaling $750,000, the Board of Supervisors agreed to contribute a minimum of $160,000 toward the project, or “whatever is necessary to close the gap,” in funding to repair the wall, O’Keefe added.

In March, the county contracted with WFT Architects in Jackson to prepare plans and documents to put out for bid to repair the wall.

Barfield also acknowledged the repairs would take much longer to complete, if not for the generosity of MDAH and the state legislature. The county had budgeted smaller amounts each year for the last couple of years, but that didn’t come close to the overall cost to repair the wall.

“Maintaining structures of such historic significance is important, but it’s also extremely costly. That wall is over 100 years old, and the cost of restoring the entire square, all four sides, was several years ago estimated at around $2 million,” she said. “So, we scaled it down when we sought grant money to deal with the two sides that are most negatively impacted by the drainage issues that are found on the property itself, on the lawn; that being the north and west walls where there is already significant erosion, and risk of even further damage if we don’t do something about it.”

Barfield credited State Sen. Briggs Hopson, of Vicksburg, for championing the county’s cause and providing the opportunity for funds.

In addition to historic restoration, she said, repairs to the wall are also a matter of public safety.

“It’s important for visibility, for first impressions, but also for the safety of residents and visitors, anyone who is strolling around that beautiful square,” she said. “Our county officials are so grateful that our state officials recognize how important these architectural features in Mississippi’s towns are. They’re important for tourism, of course, but it’s also important to the preservation of the identity of a city and its history.”