Walking up the steep hill on China Street, 26-pound toddler in tow, paid off on Saturday when my family and I reached the Old Warren County Courthouse Museum.

As we greeted neighbors with a hug around the neck and mused at the gawking out-of-towners asking drawling locals if they could “use that expression again,” it seemed as though life in a small town couldn’t get much better. (For the record, the expression was “Fixin’ to,” and the tourists were fresh off the riverboat and visiting from Wisconsin.)

It didn’t take long before we were mixed in with the rest of the crowd at the Old Courthouse Museum’s Spring Flea Market, which saw record-breaking crowds.

Drunk off the smell of Confederate jasmine cascading off the courthouse wall mingling with funnel cakes frying along Monroe Street, I couldn’t help but move a little slower through the booths, soaking in the moment.

Instead of what would normally be a race to see as much as possible before my toddler’s battery ran out, my husband and I truly relished in the moment. Her little cries of joy as she saw the “Wowas, Mama!” (flowers) at The Flower Center’s booth, and jingled every single windchime she could get her little porkchop hands around, were gift enough. 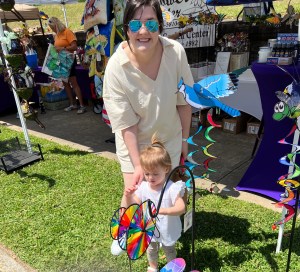 Anna Guizerix stands with her daughter, Magnolia Bailey Guizerix, as the 21-month-old tests the windcatchers at The Flower Center’s booth at the Old Courthouse Museum’s Spring Flea Market on Saturday. (Photo by Christopher Guizerix)

The good times proved tiresome for my wallet, as I purchased my fair share of goodies from local vendors, but were I to justify my purchases, I’d just use the excuse that I’d been caught up in the moment, and as such, felt led by the spirit to stimulate the economy.

Romanticizing aside, Saturday’s goings-on in Downtown Vicksburg really gave a glimpse at what we could be — perhaps, what our city once was.

The thing I love most about Vicksburg is, its local events are still, for the most part, local. In so many other towns I’ve lived in, events like the Courthouse Flea Market or even Second Saturday are geared mainly for out-of-towners.

Even in Oxford, I’d been known to skip town for a Saturday or two, just because I didn’t want to battle the tourists and the onslaught of traffic that accompanied them.

In Vicksburg, however, we’re still appealing to the townies as much as the out-of-townies, if you will. It’s a wonderful feeling to walk into a crowd of folks listening to music, shopping downtown or even waiting for a table, and to see someone you know.

We are incredibly lucky, as residents, that we’ve still got enough small town in us to recognize the value of local events and those who work hard to provide programming for us.

While the next flea market won’t be until October, there are still plenty of chances to make memories and have good times in Vicksburg between now and then. Give it a shot. You won’t be disappointed.