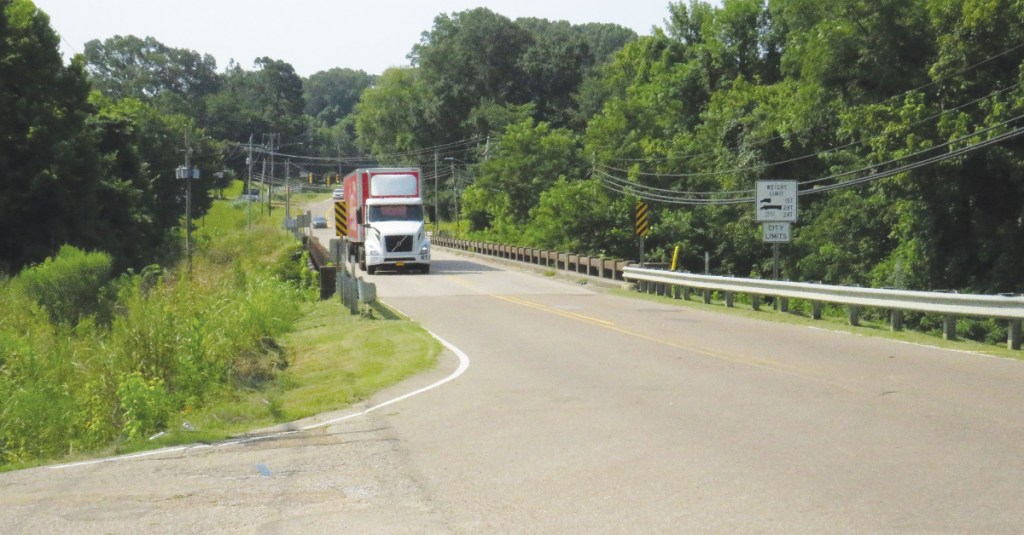 An 18-wheeler crosses Hatcher Bayou on a bridge on Fisher Ferry Road. City officials are seeking state emergency road and bridge funds to replace the bridge. (Photo by John Surratt)

The Board of Mayor and Aldermen Monday approved a resolution seeking the money and authorized Stantec to prepare and submit the application and accept and execute any documents required to start the project.

The bridge is north of the entrance to Sports Force Parks on the Mississippi on Fisher Ferry, which is the main access road to the sports complex. The Vicksburg city line goes down the center of the bridge, putting its west side in the city and the east side in Warren County.

City officials applied for emergency road and bridge funds in 2021 to cover the cost of improvements to the bridge and hired Stantec at a cost not to exceed $7,500 to evaluate the bridge’s problems.

Vicksburg Public Works Director Garnet Van Norman said the city’s plans in 2021 were to replace the bridge, adding, “We’re going to replace it this time.

He said the biggest problem is people leaving the Sports Force Parks on the Mississippi sports complex and using the bridge to walk to a nearby convenience store.

“They’re walking in the street going up to that convenience store and that’s not good,” Van Norman said. “We get that bridge replaced and we’ll have a pedestrian access on the bridge.”

If the city gets the money, he said, the old bridge will remain open for traffic while the new span is being built next to it.

“We’ve got to; that’s the only access out there,” he said.

“It would really be nice to get a new bridge out there, because a lot of people come down Fisher Ferry Road and a lot of people go to that Sports Force park and the last thing we need is for somebody to get run over there because we don’t have pedestrian access,” Van Norman said. “If we get funded, it’s going to be a big deal.”