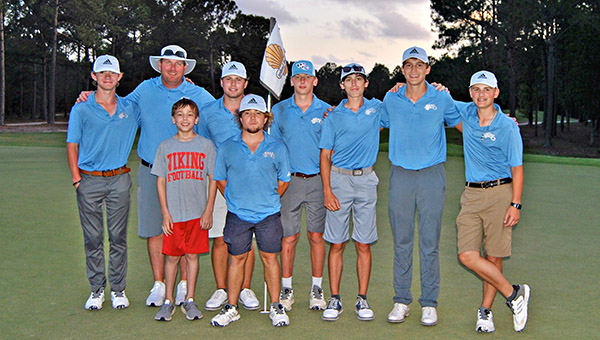 After an excellent season, Warren Central was reminded how quickly fortunes can change in golf.

The Vikings struggled to a two-round total of 732 to finish 19th out of 21 teams at the MHSAA Class 6A boys’ state tournament Monday and Tuesday at Shell Landing Golf Course in Gautier.

The Vikings won one tournament this season and qualified for the state tournament, but only made four birdies among six golfers across both rounds this week.

“As always, it’s a huge accomplishment to be able to qualify for the state tournament. We don’t take that for granted,” Warren Central coach Matt Williams said. “Five out of the six boys that played were all first-time state participants and it’s the biggest tournament they’ve ever played in. I think some nerves got to them early on Monday, and before they could get them settled we had already dug a pretty big hole to get out of.”

Warren Central’s best finisher was senior Hartley Sullivan, who shot 166 for the tournament to finish in a five-way tie for 40th place out of 125 players.

Sullivan made 11 pars in the second round, but double-bogeyed four of the seven holes and bogeyed one other.

“I thought Hartley played well for the majority of the two days. He let some shots get away from him late Monday that hurt him,” Williams said. “Yesterday he was in the last group that teed off after a 35-minute delay. He played the front at plus-2. I think when he got to the back nine he might have felt rushed due to the fact they had a little over an hour of light to play.”

“So proud of him and all he’s done for our program,” Williams said. “He always has a great attitude and you can barely get a read on him if he’s playing really well of really bad. He will be missed. He means an awful lot to our program.”

Lane Gordon had two of Warren Central’s birdies — on the 13th and 16th holes of the second round — to shoot 178 and finish in a tie for 72nd place.

Jessie Hallberg shot 183 and finished 88th. Evan Farrell finished 109th with a score of 205, Harber Williams was 117th with a score of 231, and Jackson Lafferty shot 241 to finish 120th. The top four scores from each team count toward the team total.

“Monday we played uncharacteristically tight and stressing a lot and trying to do too much. Shell Landing is a course that you have to hit certain spots of the fairway and greens to be able to score well and we didn’t do that,” Matt Williams said.

Miller was in fifth place after the first round and erased a three-shot deficit to win by one over teammate Walker Wise. First-round leader Matthew Downing of Oxford shot a 71 in the first round but a 79 in the second and finished sixth. Six golfers finished within five shots of the leader.