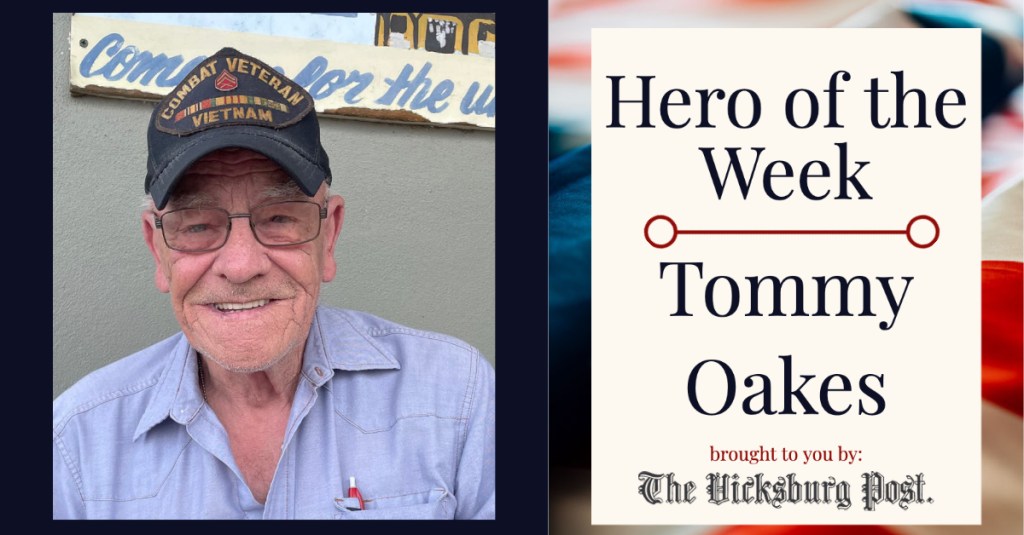 This week’s Vicksburg Post Hero of the Week is Tommy Oakes, an E-4 Corporal for U.S. Marines.

Oakes began his military career soon after graduating from high school. He stated when he was in high school his family was going through some tough times. Oakes then dropped out of 11th grade to help support his family.

“I received a letter from the army for a pre-inducted physical in Jackson, and that was when I decided to go back to school to get my diploma,” Oakes said.

He returned to school and started in the 12th grade. By February 1966, the marines sent recruiting officers to the Kosciusko Auditorium to talk to the senior boys about joining the Marines.

“That’s when I realized I got to wear that uniform,” Oakes said. “Next, I had to convince my parents to sign the affidavit so I could join the Marines on a 120 days enlistment program, which allowed me to still get my diploma.”

In May 1966, Oakes got his diploma and in June was sent to Parris Island for boot camp. After Parris Island, Oakes was sent to Washington, D.C. as a Presidential Honor Guard. There, his responsibility was to protect the President during various events such as parades. Later on, Oakes was sent to California to train for Guerrilla warfare, combat and mountain training. By January 1969, he was assigned to the India company 3rd Battalion 9th Maine regiment.

His first time in combat started in the middle of January 1969 under Operation Dewey Canyon. It was a tactile operation that tried to disrupt the 6th and 9th North Vietnamese Battalions and cut off supplies heading South.

“Every so often, we would get into firefights and nighttime ambushes,” he said.

During his time as a Marine, he completed five or six operations. Oakes finally returned to the states in February 1970 and was sent to the El Toro Air Station for his separation papers.

If there is a veteran or active duty military member who should be featured, please submit their name and contact information to vera.fedell@vicksburgpost.com.