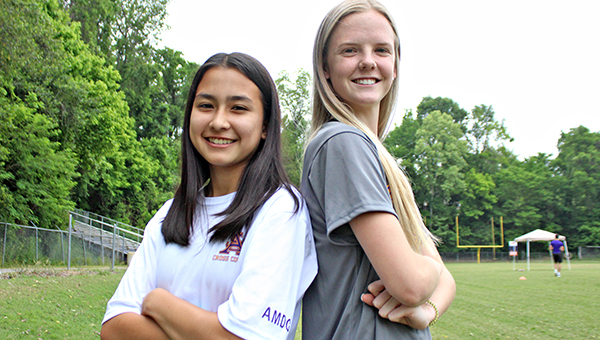 St. Aloysius' Samantha Edwards, left, and Cati Mathews are the favorites to win in the 3,200 meter run and 300 meter hurdles, respectively, Saturday at the MAIS Class 5A track meet in Flowood. (Ernest Bowker/The Vicksburg Post)

Cati Mathews does not run any relays with her St. Aloysius track and field teammate Samantha Edwards. On Saturday, however, Mathews might have the opportunity to pass her the baton in a different sense.

Mathews will try to cap a stellar high school career by winning the Class 5A girls 300 meter hurdles championship at the MAIS Overall Track Meet. Later in the day, Edwards is scheduled to compete in the 3,200 meter run.

Both athletes are the favorites in their respective events, and victories for both would mark the successful end of one era and the promising start of another.

“It’d mean a lot. I’ve put a lot of work into this season. I really want to do something with it,” Edwards said.

Both the senior Mathews and the freshman Edwards have already won state championships. Mathews claimed the Class 4A 300 meter hurdles title in 2021, while Edwards finished first at the Class 5A cross country meet last October.

Edwards has carried that success into the spring track season. She beat Madison-St. Joseph’s Angela Bethea by two seconds to win at the District 3-5A meet, and then by seven seconds last week at the South State meet.

“I’ve been doing pretty good. I’ve improved a lot. I’ve just been working on getting stronger and faster,” Edwards said. “I have good endurance, I guess. I’ll be running and keeping up with the other girls, and then they’ll start slowing down and I’ll keep going.”

Four runners from the North — Simpson Academy’s Layla Warren and Lilly Overby, and East Rankin’s Leah Collipp and Kaylynn Ramirez — clocked times better than Edwards’ South State mark of 13 minutes, 31 seconds. Edwards did, however, beat Collipp at the state cross country meet and was confident she could find a way to win again.

Getting a chance to bookend her freshman year with state championships in two different distance running disciplines, she added, would be “really nice.”

“Since I won in cross country, I want to win in track, too. Why not do both?” she said.

Mathews, meanwhile, is trying to go out on top in what will probably be the final track meet of her life. She plans to attend Mississippi State University next year, but will not run track.

Mathews only started running hurdles in 2021, but quickly became a dominant force. She won the 300 meter championship when St. Al was in Class 4A, and also finished third in the 100 meter event.

Those were two of the five medals she’s won in a six-year career with St. Al’s varsity team. She won bronze medals in the high jump and 4×400 meter relay in 2019, and a silver in the 4×400 relay in 2021. She will have competed in more than a dozen events at the state meet after this weekend.

“I’ve only been doing hurdles for two years, and winning a state title last year and trying to defend it this year is a lot of pressure — but at the same time, it’s a lot of fun,” Mathews said.

The MAIS Overall meet starts Friday morning at Jackson Academy with field events, and continues Saturday at Jackson Prep with the running events. The 300 meter hurdles begin Saturday’s session at 9:30 a.m. and it will not be the only event Mathews will compete in. She’ll also run in the 100 meter hurdles and join Ally Doiron, Megan Theriot and Presley Brister in both the 4×100 and 4×200 meter relays.

Mathews is not expected to win the 100 hurdles. Her South State time of 17.48 seconds is seeded fourth. Her 300 time of 48.52 seconds is the top seed by nearly a full second, however, and she was glad to have it go first in the order.

When her busy day ends, so will Mathews’ track career. She said she had some recruiting interest from Hinds Community College but preferred to be just a student at Mississippi State. That hardly means she won’t miss it, though.

“It’s sad,” she said. “Track has been my life for six years. It’s going to be different not having it to do.”