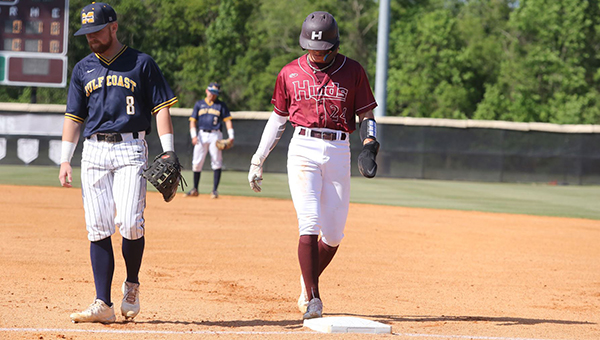 RAYMOND — Justin Williams sent Hinds Community College’s baseball team to the next round of the postseason with a dramatic flourish.

The redshirt freshman outfielder capped a four-hit day with a walk-off, two-run home run in the bottom of the ninth inning to give Hinds an 11-10 win over Mississippi Gulf Coast on Friday in Game 2 of an NJCAA Region 23 play-in series.

Hinds (28-16) swept the best-of-three series to advance to the main draw of the Region 23 tournament, which will be played May 16-20 at Pearl River Community College in Poplarville.

Williams finished 4-for-5 with three RBIs and three runs scored. His homer was the last swing in a game filled with wild ones. Hinds blew three multiple-run leads and rallied to win after falling behind 10-7 in the seventh inning.

Sean Smith hit a grand slam in the seventh to put Gulf Coast (20-25) ahead. He also hit a double and finished 3-for-4 with seven RBIs. Kade Carpenter was also 2-for-4 with two RBIs and two runs scored.

“Our guys just kept fighting back super hard,” Gulf Coast coach Bob Keller said. “It’s a disappointing way to end the season, but at the same time, we got a glimpse of some guys who will be back next year. The future is bright.”
Josh Rodriguez homered for Hinds, Dylan Coleman had three hits and former Warren Central star Clayton Thurman scored three runs.

Thurman singled and scored a run as Hinds scored twice in the bottom of the seventh to cut it to 10-9. He then started the winning rally in the ninth by drawing a leadoff walk.

After a sacrifice bunt and a pop out, Williams belted a 3-1 pitch over the center field wall to give the Eagles the victory.

“They just kept fighting and kept coming,” Keller said, “but it basically came down to one pitch.”

Former Vicksburg High standout Kendrick Bershell (3-2) pitched the last 2 2/3 innings to earn the win for Hinds. He allowed one run and one hit, and had one strikeout.

Mayson Shealy, a former Warren Central star, also pitched 2 2/3 innings out of the bullpen. He allowed four runs, but only one was earned.

“I can’t say enough about the toughness of our kids to come back from what could’ve been a back breaking grand slam from Gulf Coast, and then to just keep chipping away at their lead,” Hinds head coach Dan Rives said. “Kendrick (Bershell) was really good for us out of the bullpen, even after giving up that home run. He composed himself and allowed us to stay within striking distance.”