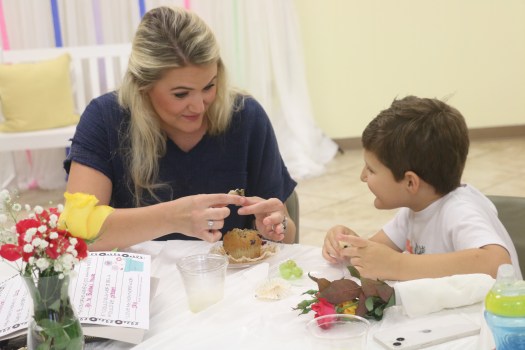 Lee Catherine Pickering and her son, Kinnison Ross, visit as they enjoy blueberry muffins. On Wednesday, the Crawford Street Playschool and Early Learning Center held a Muffins with Mom party. Students at the school had the opportunity to visit and snack with their moms. (Photo by Terri Cowart Frazier) 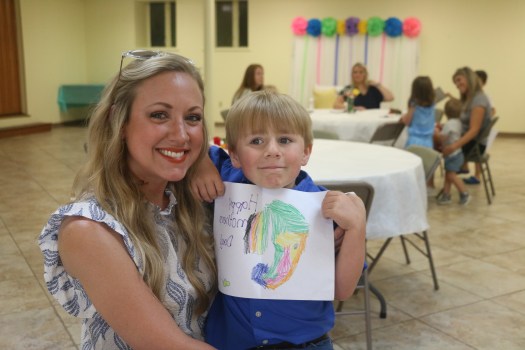 Hayes Daigre shows off the Mother's Day card he made for his mom, Brittney Daigre, Wednesday. Mother and son were enjoying the Muffins with Mom party held in Floral Hall at Crawford Street United Methodist Church. (Photo by Terri Cowart Frazier) 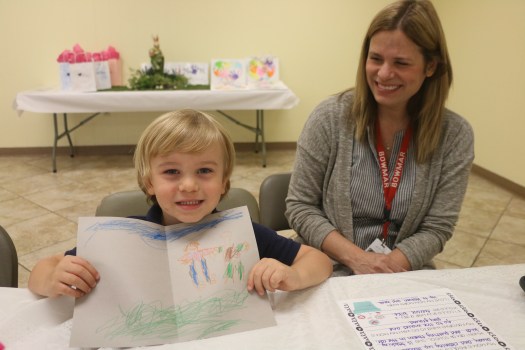 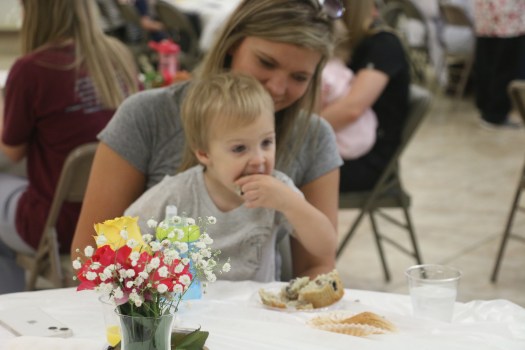 Preschoolers may not completely comprehend all their mothers do for them, but that doesn’t matter. The most important thing is they know they are loved.

To celebrate this love and Mother’s Day, students at Crawford Street Playschool and Early Learning Center held a Muffins with Mom party on Wednesday.

Five-year-old Boone Roberts said he was excited to have his mother, Aline Roberts, there by his side.

Boone, who could spell his mom’s name without a lick of assistance, said his favorite thing to do with her is to cook and play.

“I like to make food and drinks and go to the playground,” Boone said.

Brittney Daigre, who was once a student at the school when she was a toddler, was enjoying a muffin with her main man, Hayes.

Hayes said his favorite thing to do with his mom is to play “Mario Kart,” and when asked if he knew what kind of muffin his mother liked best, he replied, “Blueberry.”

Elizabeth Whittington, the director of the playschool and early learning center, said holding events that celebrate a child’s family member is always fun for the students and teachers.

“It makes me feel closer to them (the children) when I meet their mothers and grandparents and see them devoted to them all,” Whittington said.

A day of celebrating mothers dates back to the ancient Greeks and Romans. According to history.com, festivals were held in honor of the mother goddesses Rhea and Cybele.

A more modern concept — Mothering Sunday — started as an early Christian festival. It was held on the fourth Sunday of Lent and was seen as a time when the faithful would return to their mother church or the main church in the vicinity of their home for a special service. Mothering Sunday, which was at one time a major tradition in the United Kingdom and parts of Europe, shifted, over time, into a more secular holiday where children would present their mother with flowers and other items of appreciation. This European tradition began to fade, but in the 1930s and 1940s, it merged with American Mother’s Day.

In the U.S., Anna Reeves Jarvis and Julia Ward Howe are two women, who are considered forebears in creating a day to celebrate mothers. Prior to the Civil War, Jarvis helped start “Mother’s Day Work Clubs” which were geared toward teaching local women how to “properly care” for their children. These clubs eventually became unifiers following the end of the war.

The website stated, “In 1868 Jarvis organized ‘Mothers’ Friendship Day,’ at which mothers gathered with former Union and Confederate soldiers to promote reconciliation.”

Howe, a suffragette, in 1870 wrote a “Mother’s Day Proclamation.” Its intent was to unite mothers in promoting world peace. She later, in 1873, campaigned for a “Mother’s Peace Day” to be celebrated on June 2.

From these beginnings, the official Mother’s Day holiday occurred in the 1900s with credit given to Anna Jarvis, who thought Mother’s Day could be a way to honor the sacrifices mothers made for their children. Jarvis worked hard to bring her idea to fruition, and with financial backing, the first official Mother’s Day was held at a Methodist Church in Grafton, West Virginia in 1908.  Jarvis continued her efforts, wanting Mother’s Day to be added to the national calendar and in 1914 those efforts paid off when President Woodrow Wilson made it official — Mother’s Day would be recognized on the second Sunday in May.

One may think that was the end of the Mother’s Day story, but ironically, in later years, Jarvis began to turn her attention toward denouncing Mother’s Day and even disowned the holiday altogether, so-much-so, that she lobbied the government to remove it from the American calendar.

Jarvis had never intended for Mother’s Day to become commercialized, as reported by the website. “Her version of the day involved wearing a white carnation as a badge and visiting one’s mother or attending church services.”

Obviously, Jarvis’s attempts at canceling the holiday she helped create were not successful.

In the U.S. alone, 122 million phone calls are made to moms on Mother’s Day.

Mother’s Day is the busiest day of the year for the restaurant industry.

Mother’s Day is the third-most-popular holiday in the world, behind only Christmas and Easter.

Around one-quarter of all flowers purchased throughout the year are purchased for Mother’s Day.

Mother’s Day is one of the most popular church-going days.

Pink and red carnations are given to mothers that are still alive, while white ones are for those who have died.

Mother’s Day is popularly celebrated in more than 50 countries around the world. Every country celebrates it in its unique way, and not all celebrate it on the same day.

For example, in what was formerly Yugoslavia, children would tie up their mothers on Mother’s Day. The only way she could get free would be to pay her children with treats.