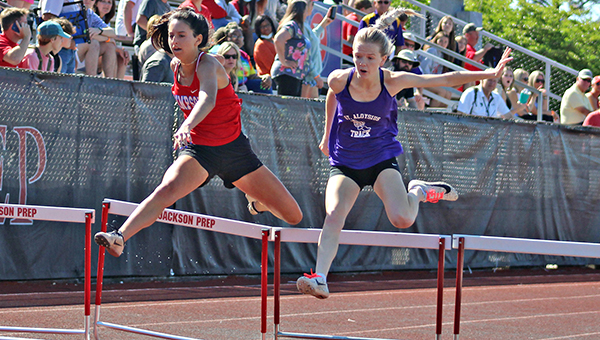 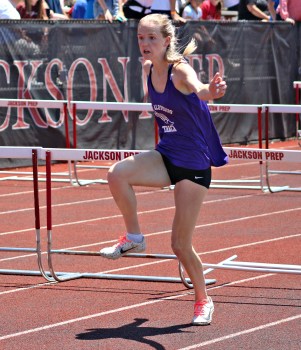 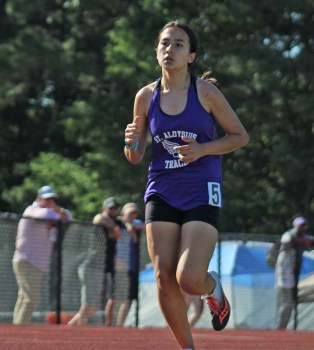 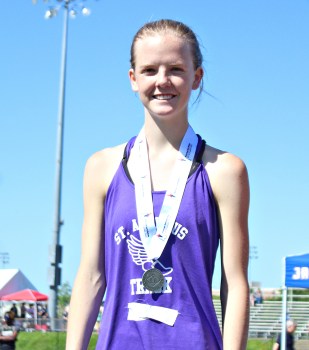 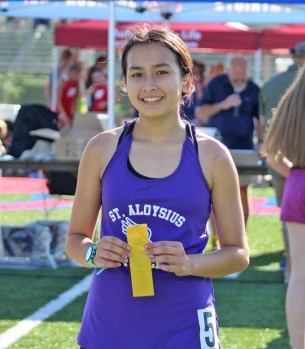 FLOWOOD — St. Aloysius’ Cati Mathews had a good day that was two steps away from being a great one.

The senior sprinter finished second in the Class 5A girls 300 meter hurdles, just .17 seconds — about a foot ­— behind Simpson Academy’s Chloe Shomon at the MAIS Overall Track Meet on Saturday.

Mathews ran a personal-best time of 46.40 seconds, but Shomon improved her time from last week’s North State meet by more than three seconds to win a hotly contested race.

Mathews and Shomon were in a two-woman race by the midway point. The third-place finisher, Maggie Shivers of Simpson Academy, crossed the line in 49.02 seconds.

Neither could separate from the other, though, and Shomon edged ahead on the next-to-last set of hurdles. She maintained the lead through the final hurdle and the last 10 yards to the finish line to deny Mathews her second consecutive state championship in the event.

“It was on the last straightaway,” Mathews said of the moment she knew it would come down to the end. “That’s usually when I don’t see anybody, and she was right next to me. It makes me more nervous because it’s like you have to keep going, keep going, don’t give up. Usually when there’s nobody around me I don’t really have to give it my all and I can stride in. This time I was giving it my all until I crossed the finish line.”

The silver medal was the only one Mathews won in four events on Saturday. She teamed with Megan Theriot, Ally Doiron and Presley Brister to finish sixth in the 4×200 meter relay and fifth in the 4×100 relay. Mathews then went solo again in the 100 meter hurdles and finished fifth with a time of 17.41 seconds.

“I’m happy. I’m tired. Extremely tired. It was difficult. But I will say the district (meet) was 10 times worse having to do six events in 3 1/2 hours. I’m very dehydrated,” a clearly exhausted Mathews said after her final event. “I’m going to miss the coach and I’m going to miss my team the most. Other than running, I’m going to miss everything about it.”

Edwards posted a personal best time of 12 minutes, 55.94 seconds — 36 seconds better than her time at last week’s South State meet — to finish fifth in the 3,200 meters.

Edwards finished sixth in Class 4A in the 800 meters in 2021 and won the Class 5A cross country championship last fall. She didn’t start running the 3,200 meters until halfway through the season, so being one of the top five runners in Class 5A wasn’t a bad ending, she said.

“I think I could have done better because I’m pretty sure my pace from cross country season was faster than that,” Edwards said. But I didn’t know I was going to be running the two miles. I was running the 800 for half my season. I wasn’t even thinking about the 3,200. I’m really glad that I was able to make it here.”

Silliman Institute’s Natalie Payne outran Edwards in the last 100 meters to finish fourth. Once the pack separated midway through the race, Payne drafted close behind Edwards for about two laps and then made her move coming out of the final turn.

“I kind of wish I had stayed behind (Payne) for most of the race and got under her with a kick like she did. But oh well. Just for future reference,” Edwards said. “She had a little more energy at the end.”