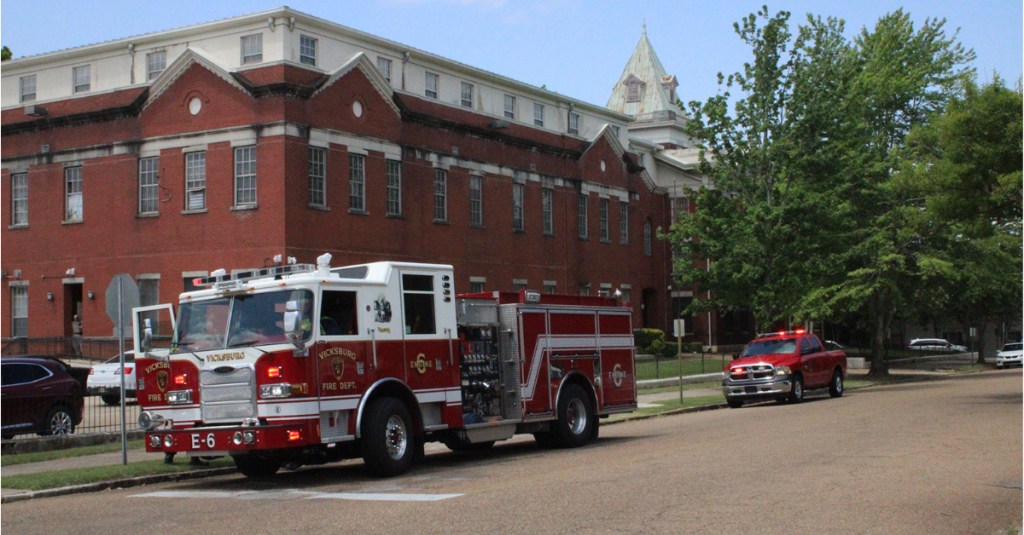 The Vicksburg Fire Department's Engine 6 pulls up in front of the Warren County Jail after responding to a call of a fire at the jail. The cause of the fire was a burning section of a mattress. (Photo by John Surratt | The Vicksburg Post)

One or more Warren County Jail inmates could face additional charges after a mattress in a cellblock was reportedly set on fire Tuesday morning.

Warren County Sheriff Martin Pace said the incident occurred about 11:45 a.m. when jail staff saw a hazy smoke coming from one of the second-floor cellblocks. A check on the second floor found five inmates in the cellblock who were evacuated to another area in the jail.

Pace and several deputies entered the cellblock and found the source of the smoke, which was an approximately 2-foot section of a mattress they said they believe the inmates set on fire, and put it out with a bucket of water.

Pace said Vicksburg firefighters inspected the cellblock for possible problems but found none, and the smoke in the cellblock was removed using an exhaust fan.

Pace said the five inmates are under investigation concerning the fire.

“Those persons or person responsible could face additional charges,” he said. “It is not clear at this time what was used to ignite the mattress.”