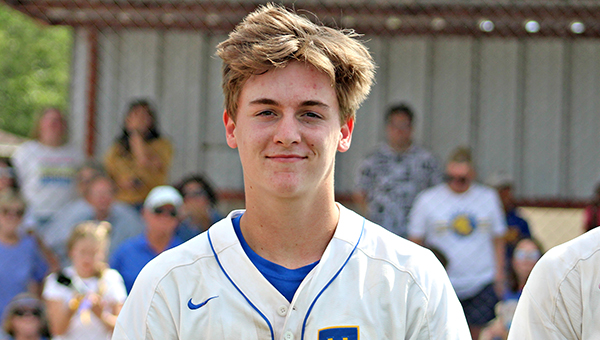 Tallulah Academy's Todd Etheridge had three hits, including a solo home run, in a 7-4 loss to Claiborne Academy in Game 1 of their MAIS Class 3A baseball semifinal series on Tuesday.

Tallulah Academy’s baseball team has had a lot of success against a lot of teams in recent years, but Claiborne Academy continues to be a stumbling block.

Claiborne scored five runs in the third inning and two more in the fourth on Tuesday, and went on to beat Tallulah 7-4 in Game 1 of their MAIS Class 3A semifinal series.

It’s the fourth time in as many meetings this season that Claiborne has beaten Tallulah, its District 5-3A rival. Claiborne also defeated Tallulah in the Class 1A semifinals in 2018 and 2019, and can do it again by beating the Trojans in Game 2 Thursday at 5 p.m. at Tallulah.

If Game 3 is needed, it will be played Saturday at Claiborne. The winner will advance to next week’s Class 3A championship series against either Benton Academy or Manchester Academy.

Game 1 of their 2022 series was scoreless until the bottom of the third inning, when Claiborne struck for five runs — all scored with two outs. After a pair of walks and a pair of strikeouts started the inning, Claiborne strung together three consecutive hits and another walk to take a 5-0 lead.

Tallulah’s Todd Etheridge hit a solo home run in the top of the fourth inning, but Claiborne scored twice — again with a pair of two-out hits — in the bottom half to go up 7-1.

Tallulah cut it to 7-4 with a bases-clearing double by Paul Michael Machen in the fifth inning. Machen was stranded at second base, however. The Trojans also loaded the bases in the top of the seventh inning but could not score a run.

Etheridge finished the game 3-for-3 with one RBI and two runs scored, and Machen had two hits and three RBIs.